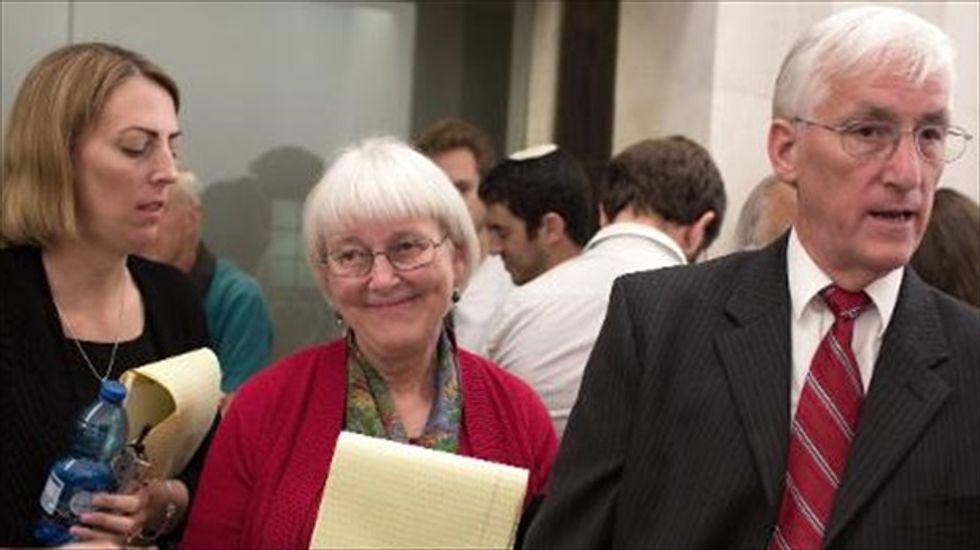 Craig (R) and Cindy Corrie, parents of US peace activist Rachel Corrie, who was run over by an Israeli bulldozer during a demonstration in 2003, wait to appeal at the Israeli Supreme Court on May 21, 2014

The family of Rachel Corrie, an American activist killed by an Israeli army bulldozer while protesting with Palestinians in 2003, has accused Israel of shielding its military from blame after the Supreme Court dismissed an appeal over her death.

In a ruling on Thursday, Israel's highest court upheld a 2012 decision by a lower court that cleared the military of responsibility for her death, saying the incident happened during wartime and was a "regrettable accident".

"We have come to see through this experience how deeply all of Israel's institutions are implicated in the impunity enjoyed by the Israeli military," the family said in a statement issued on their web site, http://rachelcorriefoundation.org.

"The Supreme Court decision ignores international law arguments regarding the protection of civilians and human rights defenders in armed conflict and grossly violates the internationally recognized right to effective remedy."

Corrie's family first brought a case in 2005, accusing Israel of intentionally and unlawfully killing their 23-year-old daughter. After a military investigation absolved the army of responsibility, the family launched a civil case in the northern city of Haifa, which ultimately ruled the death an accident.

In their appeal, the family sought to persuade the Supreme Court to accept that the death had not occurred during war. But the three justice panel, which included Supreme Court President Miriam Naor, dismissed the arguments.

"The ground-clearing actions during which Rachel was hit, answer all criteria ... to categorize it as an action during wartime," read a passage in the 24-page ruling, written in Hebrew by Justice Esther Hayut.

The Israeli army says it needed to demolish houses to prevent Palestinian militants using the area in the southern Gaza Strip as cover for attacks. It also argued the driver of the bulldozer could not have seen Corrie.

On another appeal matter, the Supreme Court told Nazareth District Court to resume proceedings on family claims that some of Corrie's remains had not been returned to them for burial in the United States following the autopsy on her body.

The family said that despite Thursday's ruling they were determined to raise awareness of Corrie's case internationally and hoped for a wider condemnation of Israel's actions. They said they were keeping their legal options open.

"We urge the international community, and not least the U.S. government, to stand with victims of human rights violations and against impunity, and to uphold fundamental tenants of international justice," they said.