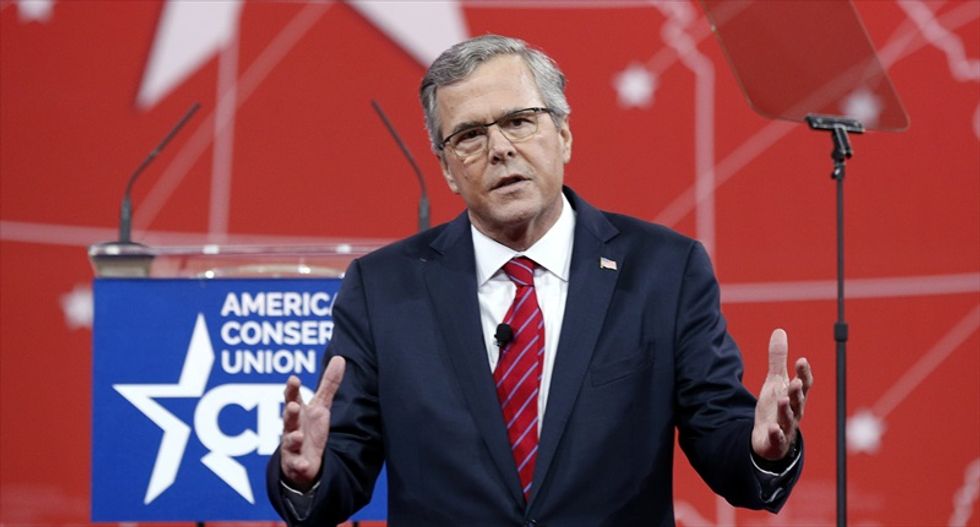 Jeb Bush speaks at the Conservative Political Action Conference (CPAC) at National Harbor in Maryland on Feb. 27, 2015. Photo by Kevin Lamarque for Reuters.

Republican Jeb Bush asked skeptical conservatives to consider him a “second choice” on Friday but refused to back down from policy positions that have led many right-leaning activists to view his potential presidential candidacy with suspicion.

Many attending the annual gathering of grassroots activists made clear they prefer a potential Bush rival, Wisconsin Governor Scott Walker, among others.

Bush was heckled and booed, but the antipathy was balanced out by enthusiastic supporters who showed up shortly before he spoke and clapped heartily and aggressively.

While some audience members walked out of the packed auditorium as he began talking, there was no mass walkout and he was well-received overall.

"I like that he has a more moderate position on immigration," said Aaron Degroot, 22, of St. Anne, Illinois.

But the party's conservative base has been alarmed at Bush's support for a pathway to citizenship for illegal immigrants and for an education policy known as Common Core.

Referring to skeptics in the audience, he said, “I'm marking them down as neutral and I want to be your second choice if I go beyond this.”

A Bush critic, conservative talk radio host Laura Ingraham, reflected some of the right's concern about Bush in an early morning talk at CPAC. She said she saw little difference between him and the overwhelming favorite for the Democratic presidential nomination, Hillary Clinton.

"Why don’t we just call it quits, and Jeb and Hillary can run on the same ticket," she said. "I'm designing the bumper sticker. It could be 'Clush.' What difference does it make?"

Facing a crowd angered by Democratic President Barack Obama's executive order relaxing immigration policy, Bush stuck to his position that Americans should be more accepting of immigrants and be willing to provide legal status for those already here.

He said it would help expand the U.S. economic base, and help his party extend its reach.

"We will be able to get (the) Latinos and young people that you need to win," he said.

On Common Core, Bush said the policy was one element of a broader education reform effort that included conservative priorities like charter schools, vouchers and an end to affirmative action.

Asked about gay marriage, Bush said he supported “traditional” marriage, meaning between a man and a woman, without the caveats expressed by others that it should be a matter for the states.

He said he opposed marijuana legalization but said it should be up to states to decide.