Jeb Bush to roll out 'Bush Doctrine II: Electric Clusterf*ck' to a sadder but not wiser nation 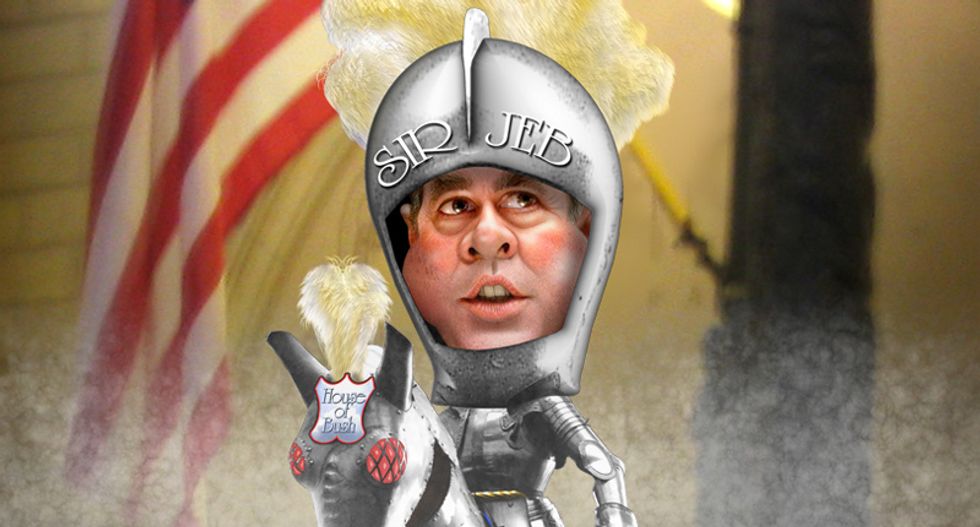 Now that Mitt Romney has pulled the plug on Ann Romney's dream of becoming America's Official Disapproving Mom, the deck has been cleared for Jeb Bush -- former governor of America's Arkham Asylum state -- to officially become the 'establishment candidate' of the GOP for 2016.

Jeb is using the Bush name to jump into the driver's seat of the 2016 GOP clown car, but he would very much like to leave all that old Bush baggage behind because ... "bold forward-looking not-looking-back leadership something something something America!"

Last week Jeb was asked about his brother's eight-year   record of 9/11, war, torture, and Nickleback, and he told the press  that it was time to move on, saying: "Please! This is supposed to be a happy occasion! Let's not bicker and argue about who killed who."

More precisely, he said, "I won't talk about the past. I'll talk about the future. If I'm in the process of considering the possibility of running, it's not about re-litigating anything in the past. It's about trying to create a set of principles and ideas that will help us move forward."

Even more precisely: "I don't even know that dick. Quit asking me about him. Now watch this drive."

Jeb wants to --as they say in Hollywood when they have no fresh ideas -- 'reboot' the Bush franchise.  Better special effects, zippier editing , more and bigger explosions with the people responsible for them walking away in slow motion; unscathed, unconcerned, and oblivious to the damage they have done.

With that in mind, Jeb will be giving a speech to the Chicago Council on Global Affairs because Barack Obama is being president all wrong.

"The great irony of the Obama presidency is this: Someone who came to office promising greater engagement with the world has left America less influential in the world," Bush will say, according to speech excerpts that were provided to Reuters.

Let's stop right here and remember that in 2009, just months after he was sworn in as President of the United States, 'the world' gave Barack Obama the Nobel Peace Prize specifically because he was not George W. Bush. Just gave him the damn thing,: "Here take it. Thanks for not being him."

But never mind that, how will Jeb Bush help America "move forward"?

By getting his dad and his brother's band back together, of course.

The former Florida governor is casting a wide net for advice on national security. An aide provided to Reuters a diverse list of 20 diplomatic and national security veterans who will be providing informal advice to Bush in the coming months.

Many of them are from past Republican administrations, including those of his father and brother, former presidents George H.W. Bush and George W. Bush, as well as that of Ronald Reagan.

The list includes people representing a wide spectrum of ideological views in the Republican Party, from the pragmatic to the hawkish. It includes James Baker, known for his pragmatism in key roles during the Reagan and George H.W. Bush presidencies, and former World Bank President Paul Wolfowitz, a hawk as deputy defense secretary who was an architect of George W. Bush's Iraq policy.

With the exception of James Baker -- who was probably thrown into the mix to send a thrill up the legs of David Gergen and Ron Fournier ... and only them -- this is basically the same crew who trashed the place, drove the cars into the swimming pool, set the house on fire, and fed chocolate to the dog from 2000 to 2008 -- and the black guy in the White House still hasn't finished cleaning their mess up.

Particularly odious -- an impressive feat with Michael Hayden on the list -- is the inclusion of Paul Wolfowitz who once gave an answer that sums up with exquisite simplicity why these people, who exhibited profoundly poor judgement and failed so miserably at their jobs in the past, are continually called back into service.

Asked by a reporter at the National Press Club, "How do you account for the intelligence failures regarding weapons of mass destruction in Iraq?" Wolfowitz replied, after a pause: "Well, I don't have to."

We are so doomed.