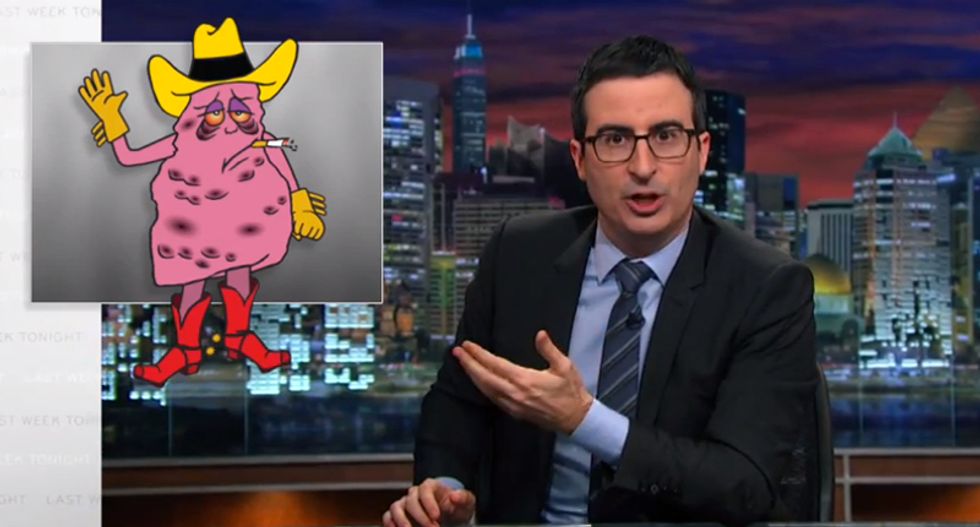 On HBO's Last Week Tonight, host John Oliver lambasted American tobacco companies for aggressively suing developing nations that have attempted to create public health laws in order to stem the tide of citizens who become addicted to the their cancer-causing products.

Oliver notes that despite the fact that U.S. tobacco company sales have substantially decreased at home, profits are higher than ever.

"Wow," he exclaimed. "So it's an aging product that's decreasing in popularity, and yet somehow it can't stop making money. It's basically the agricultural equivalent of U2."

Oliver pointed  that the soaring profits are due to tobacco companies aggressive marketing of their products in overseas markets where they have learned to bully governments in the international court system.

Oliver explained that Australia was initially successful in defending their tobacco packaging laws, which replaced tobacco brand names with appalling photos which Oliver described as looking like a "demon eye," andanother featuring a section of diseased lung he compared to looking like "baked ziti."

However tobacco company lawyers are using trade agreement laws banning government appropriation of company assets to get around laws that would replace tobacco brand names with public health warnings against smoking, stating it would lower the value of their trade marks.

"How the f*ck is the possible?" Oliver asked. "Well, it's really a simple explanation. They did it by digging up a 1993 trade agreement between Australia and Hong Kong which had a provision that said Australia couldn't seize Hong Kong-based company's property. So nine months before the lawsuits started, PMI put its Australian business in its Phillip Morris Asia division."

Oliver complimented the tobacco lawyers for their legal maneuvering, saying they deserved a "pat on the back and a punch in the face."

Oliver went on to say, "I could get angry now and call tobacco companies '*ssholes' or 'monsters' or 'open sores on Satan's d*ck,' but instead, let's rise above it and instead try to broker peace. Because it's clear what each side wants. Countries want to warn their citizens about the health dangers of smoking tobacco. Tobacco companies want to present branded images they've spent time and money to cultivate. So might I suggest a compromise."

Oliver then introduced "the new face of Marlboro: Jeff the diseased lung in a cowboy hat."

Watch the video below uploaded to YouTube by HBO: