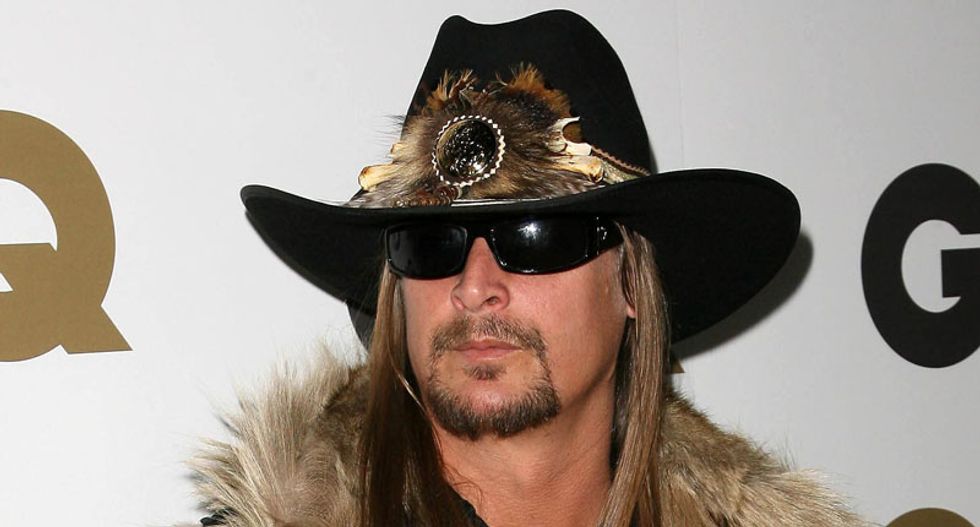 In a wide-ranging interview with Rolling Stone, timed before the release of his new album, singer-musician Kid Rock talked about buying guns before "Obummer" banned them, pop diva Beyoncé, and called 2012 Republican presidential nominee Mitt Romney "the most decent motherf*cker I've ever met in my life."

Rock, whose real name is Bob Ritchie, invited Rolling Stone writer Patrick Doyle out to his 500-acre Alabama estate -- situated right near a property owned by Hank Williams Jr. -- where he discussed his career and his 'Red State' values.

Prior to traversing the property where Rock had trapped three wild pigs he intended to shoot ("We're about to do some murderous shit"), he showed off his gun collection, including a  .22 rifle, two custom .45 pistols with ivory handles displayed in a case reading "American Badass Set," and a semiautomatic with a silencer. According to Rock, the semiautomatic is similar to the ones the Secret Service carries and he purchased it using a loophole after President Obama came into office.

"You have to get these pre-1985 with a silencer. I bought it when Obummer came into office, because I'm thinking, 'What if he f*ckin' bans guns?' ," he explained.

Showing the writer the three wild pigs he had trapped in a pen  -- explaining that they are not native to the area and over-reproduce -- Rock and his girlfriend Audrey proceeded to shoot the penned animals, with Rock exclaiming, "His ass is done," after shooting one.

Turning to the music scene, Rock related how his father --  who owned a Lincoln-Mercury dealership in his native Michigan -- didn't approve of his son's career choice, asking him, "'Why would you want to be a n****r?"

Rock admitted that has last album, Rebel Soul, was a flop, and seemed bewildered by the popularity of Beyoncé.

"Beyoncé, to me, doesn't have a f*cking 'Purple Rain,' but she's the biggest thing on Earth. How can you be that big without at least one 'Sweet Home Alabama' or 'Old Time Rock & Roll'?" he said. "People are like, 'Beyoncé's hot. Got a nice f*cking ass.' I'm like, 'Cool, I like skinny white chicks with big tits.' Doesn't really f*cking do much for me."

The rocker, who is now 43 with a son in college, admits that he has settled down from his hard partying days, "I'd be driving the field trip Monday after I banged, like, four hookers. Well, not hookers, but, you know, four nice girls on Saturday night in Cincinnati."

Now he  hobnobs with conservative politicians; describing Mitt Romney as "the most decent motherf*cker I've ever met in my life," and texting with former Alaska governor Sarah Palin.

Rock even admitted he has a membership at golfer Jack Nicklaus' private Bear's Club, near Palm Beach, Florida, saying, "If you told me five years ago I'd have to take my hat off and tuck my shirt in, I'd have slapped the taste out of your mouth. Now I'm like, 'Look at me, hair slicked back, shirt tucked in.' I'm like, 'What a fag!'"

Rock intends to go out on the road promoting his new album, First Kiss, saying he plans to keep ticket prices down -- blaming Ticketmaster and calling them "F*ckin' whores" -- and saying he is fully aware who his audience is these days.

"45-50-year-old girls wearing extra-large T-shirts — they're my bread and butter," He said. " They know how to f*cking party — 'I don't give a f*ck, I'm making a T-shirt and putting sequins on it. I'm saving my money for beer and having a good time.'"