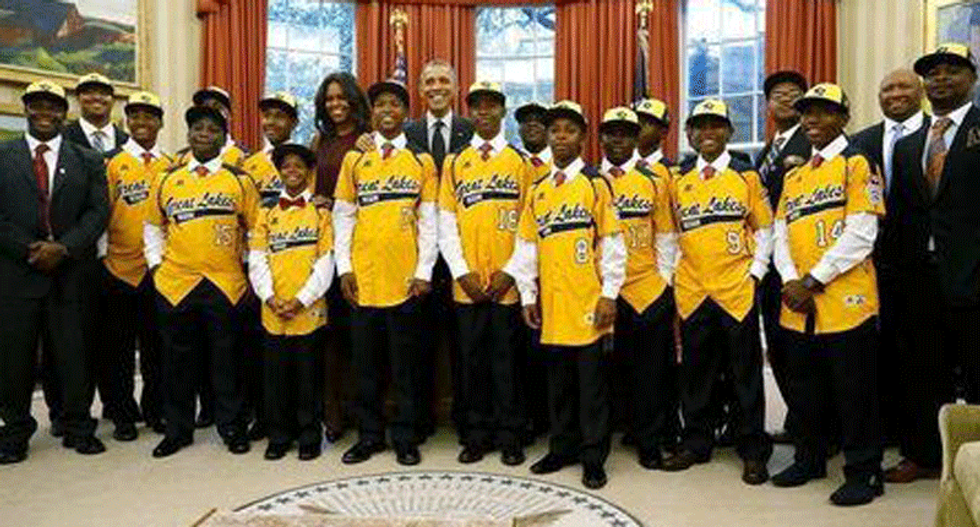 A story that absorbed millions across the US last year has come to a “heartbreaking” end after Jackie Robinson West, the US champions at the Little League World Series, were stripped of their title.

The team attracted significant attention after becoming the first all African-American team to win the US title before losing the world championship to South Korea’s Seoul. The team even met Barack Obama at the White House. On Wednesday, Little League Baseball announced that Jackie Robinson West’s success was based on shaky foundations – they had drawn players from outside the geographic area they represent.

“For more than 75 years, Little League has been an organization where fair play is valued over the importance of wins and losses,” Little League International CEO, Stephen D Keener, said. “This is a heartbreaking decision. What these players accomplished on the field and the memories and lessons they have learned during the Little League World Series tournament is something the kids can be proud of, but it is unfortunate that the actions of adults have led to this outcome.”

The results of the investigation concluded the team had used an inaccurate map and also drawn players from other districts in order to build as strong a team as possible. Jackie Robinson West’s manager, Darold Butler, has been suspended.

Keener added that Little League had no choice but to strip Jackie Robinson of the title, which will now go to Mountain Ridge Little League from Las Vegas. “As our Little League operations staff learned of the many issues and actions that occurred over the course of 2014 and prior, as painful as this is, we feel it a necessary decision to maintain the integrity of the Little League program. No team can be allowed to attempt to strengthen its team by putting players on their roster that live outside their boundaries.”

A local Illinois administrator, Michael Kelly, has also lost his position. “Little League takes these matters very seriously and has spent countless hours gathering information about the many issues facing Jackie Robinson West Little League and Illinois District 4,” Keener said. “During our review, it became clear that both Jackie Robinson West officials and District Administrator, Mike Kelly signed documents to make players eligible who should not have been.”

For a competition based around the simple joys of youth, Little League has attracted its share of scandal. In 1992 a team from Zamboanga in the Phillippines were stripped of their title for fielding players who were either overage or from outside the district. In 2001, a team from the Bronx had to forfeit their wins after it was discovered that their pitcher was older than believed.