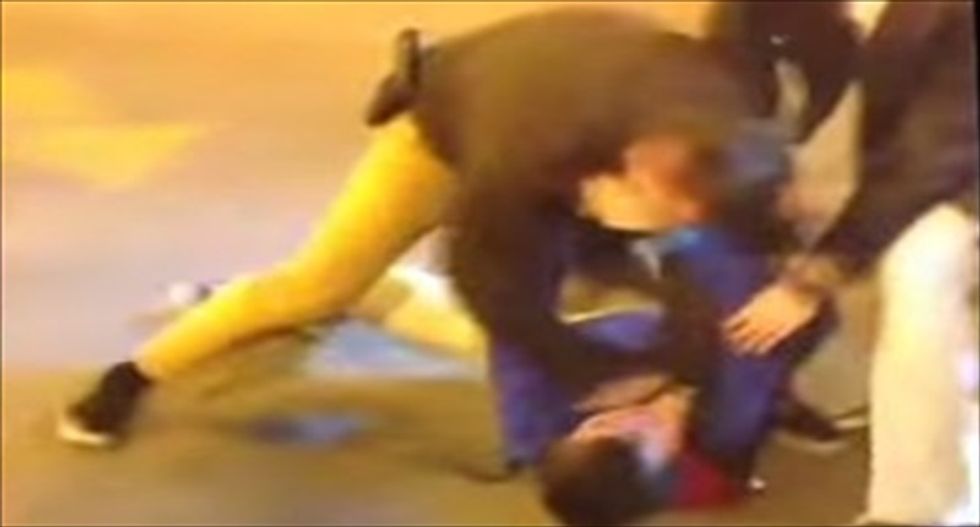 Authorities in Jefferson Parish, Louisiana have come under criticism after a video was posted online showing an undercover deputy punching a high school student in the face before arresting him, the New Orleans Advocate reported.

The footage shows Detective Nick Breaux holding 17-year-old Brady Becker on the ground by his throat before hitting him. Breaux was reportedly working undercover at the time of the encounter inside a shopping mall parking lot.

Breaux is then seen holding his gun and telling witnesses, "Back the f*ck up. Back up." He puts his hand on the gun again after a colleague lifts Becker and takes him into custody. The video has been seen nearly 38,000 times since being posted online on Sunday.

An arrest report stated that Becker was yelling "f*ck the cops" before Breaux and his colleague identified themselves as detectives. The report also stated that the teen "refused orders to stop and was striking Det. Breaux," which can not be seen in the short clip of the incident.

Becker reportedly told authorities that he had consumed "a half bottle of Crown" before the encounter. He was treated at a local hospital for a laceration over his eye before being charged with battery of a police officer, resisting an officer, possession of alcohol by a minor and inciting a riot.

According to the New Orleans Time-Picayune, police said that Becker's friends started fighting officers after the video stopped. One reportedly suffered "an injury to the hand." No further arrests were made because the group escaped the scene.

WDSU-TV reported that according to Becker's mother, he pushed one of the deputies because he was not aware that Breaux or his colleague were detectives when they encountered one of his friends.

Becker's family has not contacted the local sheriff's department, but his attorney, David Belfield, said Breaux did not identify himself as a detective until "after he had beaten the crap out of Brady."

A department spokesperson, Col. John Fortunato, said officials have been in touch with Belfield and encouraged Becker's family to file a complaint.

Watch the video, as posted online on Sunday, below.