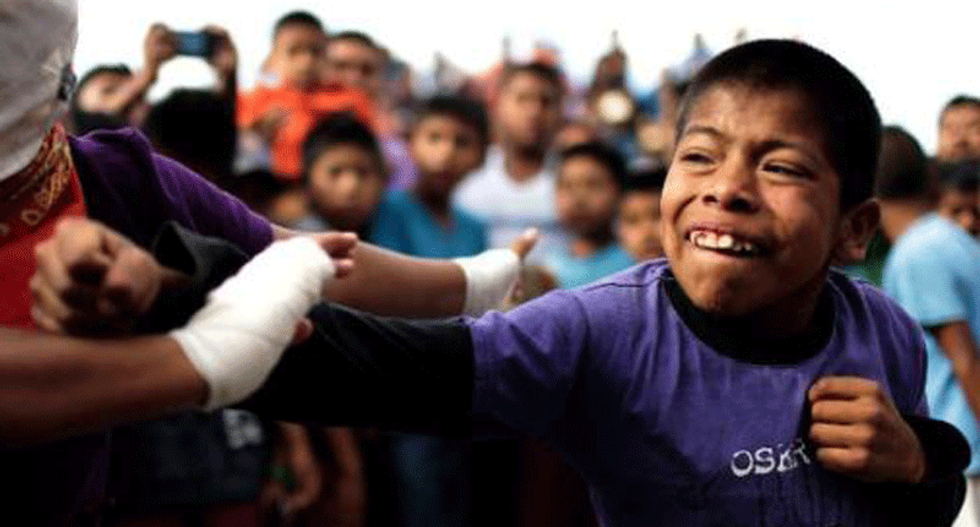 Young men hit each other in a festival enlivened with music and mezcal booze, in a fight re-enacting battles with marauding Aztecs 500 years ago (AFP)

The battles among members of the Nahua Indian community were part of Carnival celebrations in the village of Zitlala in southern Guerrero state.

Men, women and children donned masks in a makeshift arena in the town square in the village of 20,000 people about 200 kilometers (120 miles) south of Mexico City.

One or more pairs of combatants, wearing skirts, fought for about four hours in fierce clashes that ended only when one of the fighters gave up or was simply knocked out.

The festival emerged more than 500 years ago to commemorate frequent battles with Aztecs, who would come to Nahua communities seeking payment of tributes and to steal women.

In order to protect their daughters, sisters and girlfriends, back then men would wear skirts to try to fool the invaders, then engage them in hand to hand combat, said Jose, a 60-year old Indian who has taken part in these fights since he was 17.

The fighters, who come from several communities in the mountains of Guerrero, seek out a rival, look them right in the eye, and challenge them to a fight--which often turns bloody.

Bloodshed was a necessary component of the ceremony. It was part of a merging of indigenous and Catholic beliefs and served as an offering to the gods to pray for rain to nurture harvests of corn, beans and pumpkins.

The fights are accompanied by bands playing wind instruments that add a merry element to the fiesta, which also features abundant food, flowers and candles.