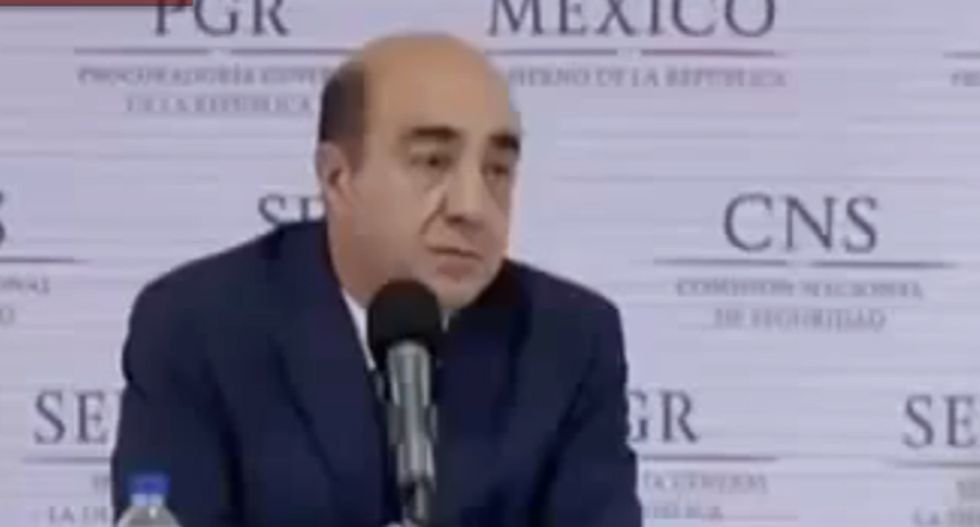 Mexico's much-maligned attorney general, who has faced public anger over the investigation into the presumed slaughter of 43 students, stepped down Friday and was given a more low-key cabinet post.

Jesus Murillo Karam was sworn in as the new minister of rural, territorial and urban development at a ceremony presided by President Enrique Pena Nieto, who praised his longtime friend for his "intelligence" and "love and commitment for Mexico."

Murillo Karam's exit was widely expected under a reform that will turn the federal prosecutor's office into an autonomous department.

But he was also heavily criticized by human rights groups, protestors and parents of the 43 students over his handling of the case.

Murillo Karam concluded that the students were abducted by corrupt local police officers in the city of Iguala, who handed them over to a drug gang that killed the young men and incinerated their bodies in September.

But Human Rights Watch, Amnesty International and an independent team of Argentine forensic experts have questioned his conclusions, saying it was too soon to declare the students dead without more physical evidence.

Parents of the students refuse to believe the young men are dead. Only one body has been identified among charred remains.

Murillo Karam also drew public scorn when he declared "I'm tired now" to wrap up a press conference in November in which he first indicated the students were probably dead.

His words became a trending topic on Twitter in Mexico and a rallying cry for protestors, with the Spanish hashtag #YaMeCanse.

The case has turned into a political headache for Pena Nieto, who is facing the biggest challenge of his administration amid relentless drug violence.

Felipe de la Cruz, spokesman for the families of the 43 students, said Murillo Karam "never did what he was supposed to do" and that "his historic lie was discovered." The comment came after Murillo Karam said he gave the "historic truth" on the case.

"The fact that he has moved to a minor ministry is (a tactic) that the Mexican government has always used to avoid responsibility," de la Cruz told AFP.

- Woman senator to step in -

But Pena Nieto had only words of praise for Murillo Karam, saying he had taken on a "great responsibility and complex and challenging tasks, particularly his last one, an investigation like none was ever done before in recent times."

Pena Nieto will name Senator Arely Gomez as the interim attorney general, according to a source familiar with the matter.

Her appointment is a surprise because Gomez had requested leave from her senate seat on Thursday to take up a different job within the attorney general's office.

In his speech, Murillo Karam did not mention his work as attorney general and instead focused on his new job, saying the ministry's aim was to "seek justice" and end inequality in Mexico through urban and rural projects.

Murillo Karam is a member of Pena Nieto's Institutional Revolutionary Party and has also been a senator, congressman and governor.