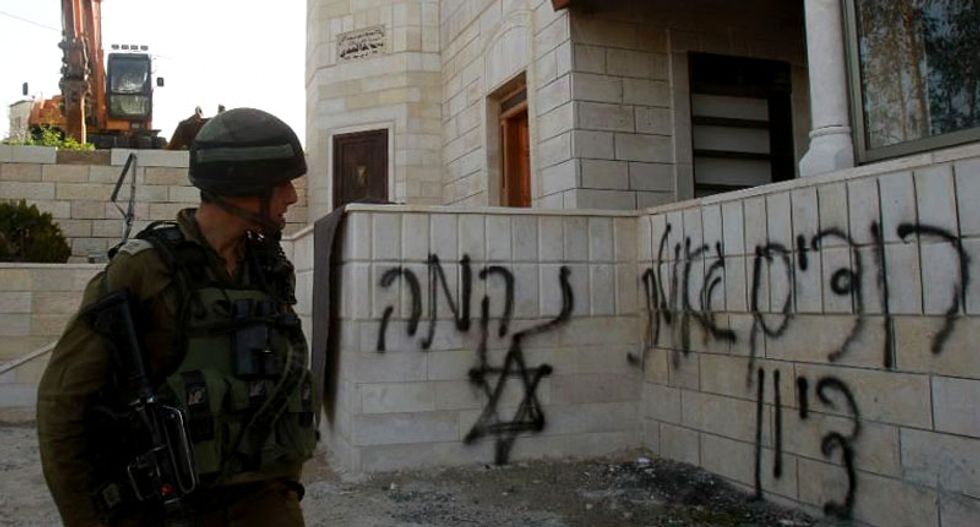 A Israeli soldier stands guard outside a mosque that was torched with anti-Arab slogans in the West Bank village of Jaba, on February 25, 2015 (AFP)

A West Bank mosque was set alight in a village near Bethlehem Tuesday with anti-Arab slogans in Hebrew sprayed on a nearby wall, Palestinian witnesses said.

The fire was discovered in the mosque in Jaba village at about 4:00 am (0200 GMT). Villagers managed to put it out but there was some damage to the building, the witnesses said.

On a nearby wall, the perpetrators had sprayed the word "revenge" and other slogans in Hebrew alongside a Star of David, with witnesses saying it was believed to be the work of hardline Jewish settlers.

The village is located 10 kilometres (six miles) southwest of Bethlehem, close to Gush Etzion, a cluster of Jewish settlements.

Police spokeswoman Luba Samri confirmed the Palestinians had filed a complaint about the torching of a mosque in Jaba and said the nationalistic crime unit would investigate.

The Palestinian foreign ministry said the attack was tantamount to "an official declaration of religious war," the official WAFA news agency reported.

"This new attack is a sign of the mounting violent extremism within Israeli society," it said.

"I am concerned by this and all other religiously motivated attacks and provocations by any party, which may further inflame an already volatile environment," UN peace envoy Robert Serry said.

"Extremists on both sides must not be allowed to turn this conflict into a religious one," he said in a statement.

The incident bore the hallmarks of a so-called "price tag" attack -- a euphemism for nationalistically motivated hate crime by Jewish extremists which generally targets Palestinians or Arab Israelis.