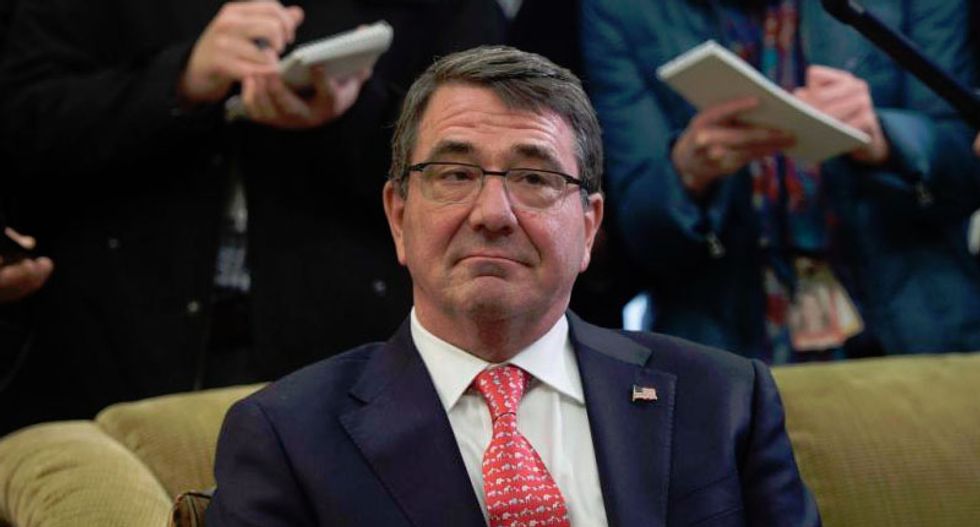 Newly sworn-in US Secretary of Defense Ashton Carter (C) is surrounded by reporters as he meets with US President Barack Obama and Vice President Joe Biden in the Oval Office of the White House in Washington, DC, February 17, 2015 (AFP Photo/Jim Watson)

US Defense Secretary Ashton Carter, in one of his first decisions since taking office, plans to replace the military officer who serves as the Pentagon press spokesman with a civilian, officials said Wednesday.

Rear Admiral John Kirby told reporters he would be stepping down and defense officials said he would be succeeded by a civilian, amid concerns that a member of the military should not be embroiled in potentially politically charged questions.

But officials also acknowledged that Carter -- who was sworn in on Tuesday -- wanted to put his stamp on the highly visible post in the face of a White House that tends to exert tight control, particularly when it comes to media relations.

Kirby, who was appointed to the post by former defense secretary Chuck Hagel in 2013, became a frequent guest on cable news networks and was well-liked by the White House.

Carter "comes to the job wanting to sort of revisit the role of spokesman here and one of the questions that I think he wants to rhetorically ask and consider is not just who the individual is, but what that individual represents, and whether it's appropriate or not to have a uniform up here," Kirby said.

"And those are fair questions for him to ask as he comes into the job."

The admiral said there were some uncomfortable moments over the past year when he was confronted with purely political questions but he said those instances were "few and very, very far between."

Before becoming Pentagon press secretary, Kirby worked for years as a public affairs officer in the US Navy and also served as spokesman for the former chairman of the US Joint Chiefs of Staff, Admiral Mike Mullen.