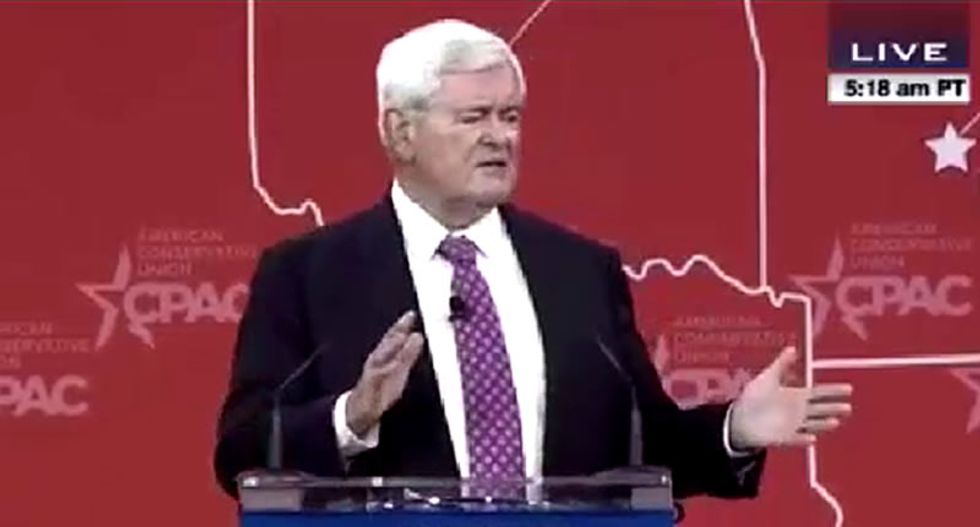 The Conservative Political Action Conference opened Friday with a speech by former Speaker of the House Newt Gingrich in which he claimed that Islamic extremists could exercise undue influence over Democratic presidential candidate Hillary Clinton.

"ISIS is piece of a world-wide threat, but it isn't the threat," he began. "The threat is a movement of radical Islamism."

He said that there are two wings of radical Islam, the violent one like ISIS and Boko Haram. But there is another, "more deadly wing, [that] believes that jihad can be waged in a culture and political environment."

"And if they get that done peacefully, they'll take that."

"We need a set of hearings on the financial penetration of American system by radical foreigners determined to change our society," Gingrich continued. He then brought up the recent investigation by The Washington Post on foreign donations to the Clinton Foundation, linking those donations to similar ones made by Nazi Germany in the 1940s and the Soviet Union in the 1950s.

"What have we learned about the Clinton Foundation?" he asked. "It has routinely accepted money from governments who fund terrorism. This is not an issue of politics -- this goes to the very core question about the ability of a foreigner to pour cash into the US for the purpose of reshaping American policy."

He then discussed how Nazi Germany poured money into the United States to agents, "so we wrote a law to stop that. And then about the time we were defeating Nazi Germany, we realized there was second wave of subversion -- that there was a whole cycle of Soviet agents and Soviet infiltration."

"So we went through a second cycle between 1945 and 1955 of looking at foreign subversion of the United States."

"With both Nazi Germany and the Soviet Union, we established a set of ground rules. You cannot secretly accept money for the purposes of subverting America -- but look at how some of greatest universities and think tanks accept millions of dollars from dictatorships whose values are fundamentally alien to us."

"The people who want to eliminate the American concept of freedom and rule of law, are bribing us to get us to limit ourselves," he said. "But I'm told if I accurately describe radical Islamism, it's Islamophobia -- I call it truth."

"They may say to you, there's no quid pro quo. If Bill and Hillary drop by and leave with $25 million in Saudi money, why would you think the Saudis expect anything in return?"

"I don't think she would obey them," Gingrich said, before claiming that it leads to "a totally distorted policy. When you go to a country that is currently sentenced a blogger to a 1,000 lashes because they set up a blog site calling for a more open Saudi Arabia, and you take money from the government that's doing that?"

"A government that totally oppresses women and Jews and Christians and Buddhists -- that represents a total religious dictatorship, and you take their money? You want me to imagine that that couldn't possibly taint the United States, or taint the next president?"

"I think we have to be honest about this -- this is an enormous threat, and we need to have a response in Congress just to lay out the facts. The Clinton Foundation is going to have to report, in actual dollars, every foreign contribution they've gotten."