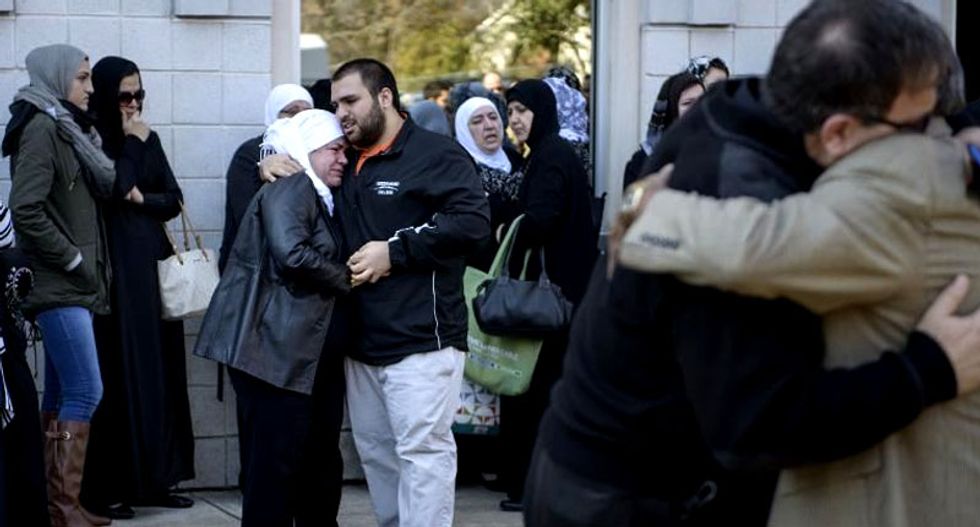 People wait as others participate in a viewing at the Islamic Association of Raleigh, North Carolina, February 12, 2015, before a service for the three students shot to death earlier this week (AFP)

Muslim leaders called for calm after three students were killed by a gunman with anti-religious views as this North Carolina university town prepared Thursday to bury the victims.

Deah Shaddy Barakat, 23, his wife Yusor Mohammad, 21, and her 19-year-old sister Razan Mohammad Abu-Salha were shot to death Tuesday by a neighbor in what police said was being investigated as a parking dispute.

The alleged shooter, Craig Stephen Hicks, 46, was believed to be strongly opposed to religion, as his Facebook page showed dozens of anti-religious posts, including proclamations denouncing Christianity, Mormonism and Islam.

Thousands gathered late Wednesday at a tearful candlelight vigil, with many expressing fear the students were killed because of their religion.

"This is definitely a hate crime, it's all over his Facebook that he's atheist and hates Christians and hates Muslims," said Sarah Alhorani, a former student at University of North Carolina where Barakat was a second year dentistry student.

"To be honest, it makes me more scared because I have two babies, so I don't even want to imagine," she said.

Family friends said Mohammad had complained in the past that Hicks had harassed her, appearing at her door with a gun on his waist.

Some Muslim leaders said the shooting was a reflection of wider anti-Muslim hostility, and warned it could sow fear among Muslim Americans.

"Already it is stoking fears. I've received dozens of phone calls in just the short period of time," Nihad Awad, director of the Council on American-Islamic Relations told AFP.

"People are very concerned about what happened they feel that this is a premeditated hate crime," he said.

Chapel Hill Police lieutenant Joshua Mecimore said Thursday the incident still appeared to have been provoked by "an ongoing parking dispute between neighbors," but said all possible motives were being investigated.

"We ask that the authorities investigate these senseless and horrendous murders as a hate crime," Suzanne Barakat told reporters.

"It's time to mourn but its also time to call for harmony and peace," the head of the Islamic Association in neighboring Raleigh, Mohamed Elgamal, told AFP.

He said the killing should be treated as not "a Muslim issue, this is an American issue," and said despite discrimination, Muslims across the United State should stand together.

"There are some fears but not to the degree that we really are going to change our way of life because if we do then we let those killers win, so we really have to be better than them," he said, in the Muslim center where the three victims are set to be buried later Thursday.

"We still believe in peaceful and harmonious relationship in our community with Muslims and non Muslims, it does not matter," he said.

There are 65,000 Muslims in North Carolina, which has a population of 9.9 million, and the majority live in the Chapel Hill area.

For some, the brutal slayings promised to bring Muslims and non-Muslims together.

"We need to take their memory and move forward. We can't express hatred towards those who committed the acts," said Zakeria Haidary, a friend of Barakat.

"I think it will have a ripple effect but I think tonight's a testament that it will be a positive ripple effect. I'm a Muslim and I've never felt more supported," he told AFP.

At home, the community was still reeling from the murders, rattled by fears that Muslims could be targetted.

"Today I was scared to walk out my door, but I did and I kept going and I kept my scarf on and you keep moving on," Alhorano said.

"It makes you stronger. In the beginning you're scared because you think that could have been any one of us but it wasn't."