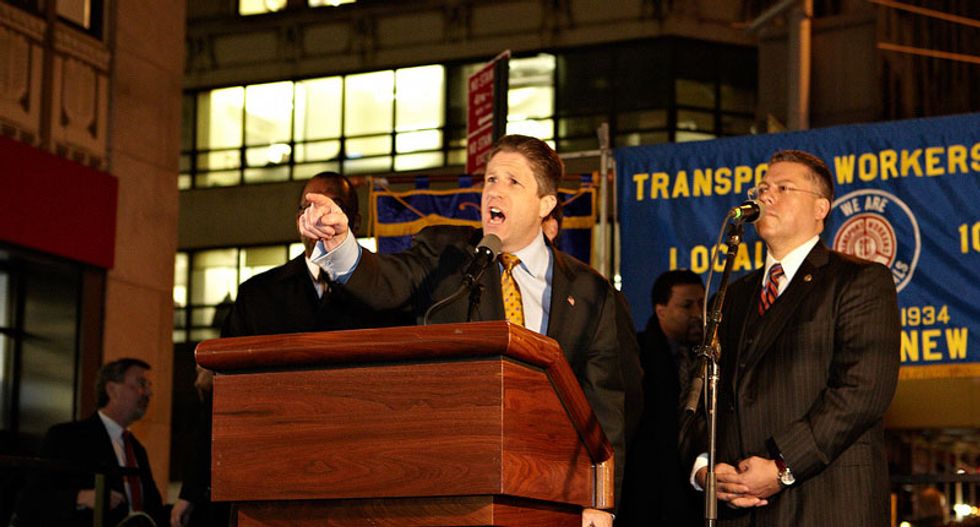 The outspoken president of one of New York’s main police unions has come under fire for a campaign video critics say exploits the deaths of two NYPD officers who were killed in an attack in December.

Some officers from New York City’s 84th precinct, where officers Wenjian Liu and Rafael Ramos worked, are upset that the video includes an image of Patrolmen’s Benevolent Association (PBA) president Patrick Lynch attending a makeshift memorial for the officers, according to a report by the New York Daily News .

“It’s disgusting,” said an officer assigned to the 84th precinct, according to the newspaper. “I just don’t think a death of a cop should be used as an election tool.”

The video, which runs just over a minute, shows a series of images of Lynch dressed in blue, some taken at the Brooklyn street corner where the officers were shot by Ismaaiyl Brinsley, a 28-year-old with a history of mental health problems, while sitting in their patrol car on 20 December. As the photos of Lynch appear, the video states: “He has brought back pride to the PBA” and “unmatched dedication to the members” and “re-elect team Lynch in 2015”.

A spokesman for Lynch, Al O’Leary, did not immediately return requests by the Guardian for comment. He told the Daily News that Lynch wore his uniform as a point of pride, and that the photos used in the video were the most recent of the union leader.

O’Leary told the Daily News he did not know who was behind the video, which was apparently posted posted on PBA treasurer Joseph Alejandro’s Facebook page, from where it has since been removed.

On the night of Liu and Ramos’ deaths, Lynch, who is in the process of negotiating a contract with the city, said there was “blood on the steps of city hall, in the office of the mayor”.

In the following weeks, Lynch continued to criticize Mayor Bill de Blasio, as rank-and-file officers engaged in a protracted protest. At the two funerals, groups of officers turned their backs on De Blasio as he spoke; on the streets, officers engaged in a work slowdown, in which the numbers for police activity, especially regarding minor offences, dropped dramatically.

The slowdown was reportedly initiated after the PBA circulated a memo among officers, but the union denied that there ever was a slowdown in operation. At the time, Lynch said in a statement that ordering policemen to return to work or face consequences would only exacerbate the problem and “make morale among police and the relationship with the community even worse”.