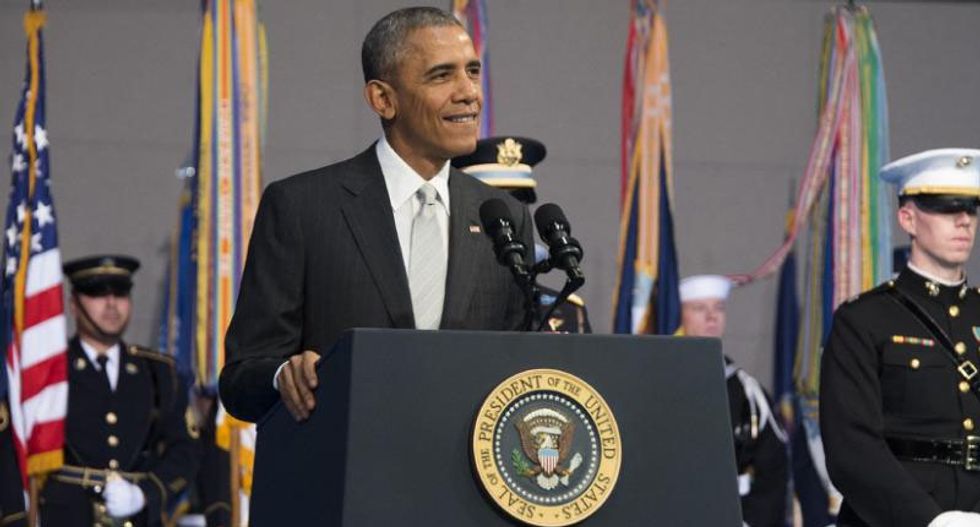 With potential Republican candidates for president in 2016 talking up ways to help the middle class, President Barack Obama made clear on Friday he believes it was his idea first.

"The new plan is to rebrand themselves as the party of the middle class," Obama said in a speech to the Democratic National Committee, drawing laughter. "I'm not making this up."

Obama took a few shots at Republican Senator Rand Paul of Kentucky and former Florida Governor Jeb Bush, both potential contenders for the 2016 presidential race to succeed the Democratic incumbent.

In a 2013 speech to conservative activists, Paul said: "We need a Republican Party that shows up on the South Side of Chicago and shouts at the top of our lungs, 'We are the party of jobs and opportunity. The GOP is the ticket to the middle class.’"

Obama, who calls the South Side of Chicago home, told Democratic supporters he thinks "Rand's an interesting guy.

"I guarantee you that Senator Paul would be welcome there. We are a friendly bunch," Obama said, chuckling.

"I mean, it's a little strange people show up and just start shouting at the top of their lungs, but we're friendly, and it would be OK," Obama said.

Paul is not alone in stressing that Republicans need to find ways to reduce income inequality. Bush also emphasized the point in a speech at the Detroit Economic Club earlier this month.

“Today, Americans across the country are frustrated. They see only a small portion of the population riding the economy’s 'up' escalator," Bush said on Feb. 4. "It’s true enough that we’ve seen some recent and welcome good news on the economy. But it’s very little, and it’s come very late."