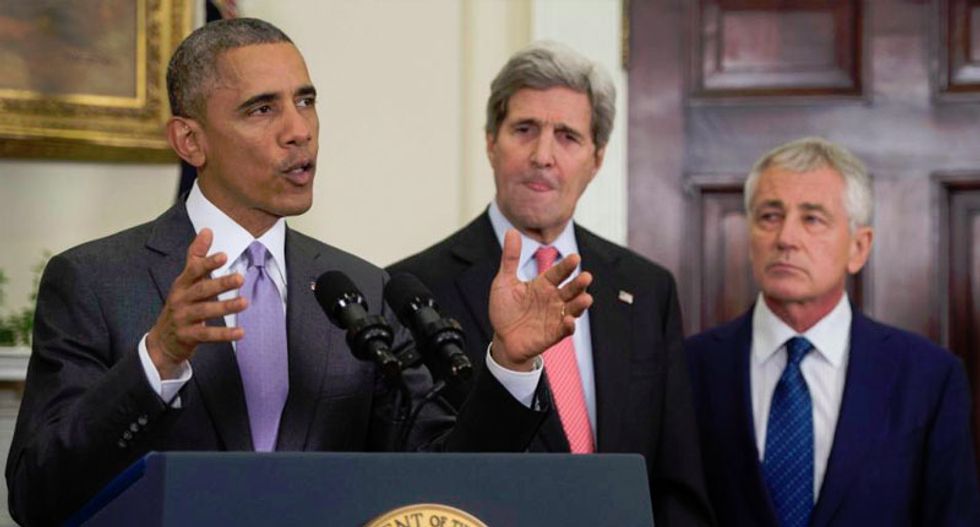 US President Barack Obama (L) deliver remarks on legislation he sent to Congress to authorize the use of military force against the Islamic State, in Washington on February 11, 2015 (AFP Photo/Jim Watson)

President Barack Obama said he would not flinch from sending US special forces to kill Islamic State leaders, as he called for Congress to authorize military operations that stop short of a full-scale invasion.

Tantamount to a declaration of war, Obama on Wednesday asked lawmakers for formal authority to take the fight to the Islamic State group, beyond their current footholds in Syria and Iraq if necessary.

"Our coalition is on the offensive," Obama said, adding Islamic State is "on the defensive" and is "going to lose."

Since August 2014, the US military -- along with allies -- has been conducting a campaign of air strikes against Islamic State in Iraq and Syria.

Obama has promised to back up the strikes with targeted covert ground-based attacks if necessary.

"If we had actionable intelligence about a gathering of ISIL (Islamic State) leaders, and our partners didn't have the capacity to get them, I would be prepared to order our special forces to take action," Obama said.

"I will not allow these terrorists to have a safe haven."

The request signals a ramping up of pressure on Islamic State as the Iraqi government prepares for a major ground offensive, expected within months.

It would also provide a firmer legal basis to prosecute a months-old military campaign and provide political cover at home.

With the death of US hostage Kayla Mueller and the killing of three other US hostages, Obama has been under pressure to re-examine his strategy.

In order to win the backing of the Republican-controlled Congress and overcome jitters within his own Democratic party, Obama placed limits on his power to deploy the military in both form and scope.

The proposed legislation does not authorize "enduring offensive ground combat operations," according to a draft sent to Congress.

The authorization would also "terminate three years after the date of the enactment of this joint resolution, unless reauthorized."

Obama will also have to report to Congress every six months.

But those limitations were not enough to assuage the concerns of the longest-serving Democratic senator, Patrick Leahy, and others.

"I have serious concerns about the breadth and ambiguity of this proposal," Leahy said in a statement.

With bitter arguments over previous wars still seared in US political memory, Obama was quick to make clear this would not be a sequel to Iraq or Afghanistan.

Obama said he had no intention to see the United States getting "dragged back into another prolonged ground war in the Middle East."

"Local forces on the ground who know their countries best are best positioned to take the ground fight to ISIL", he said.

But Republicans have warned ruling out ground forces could hamper military strategy.

"If we are going to defeat this enemy, we need a comprehensive military strategy and a robust authorization, not one that limits our options," said House Speaker John Boehner.

"Any authorization for the use of military force must give our military commanders the flexibility and authorities they need to succeed and protect our people."

The White House said that while Congress had been extensively consulted before the draft authorization was released, it was "a starting point in conversations."

"I would not be surprised if there are members of Congress who take a look at this legislation and decide, well, I think there are some things that we should tweak here," said White House spokesman Josh Earnest.

U.S. Rep. Kevin Brady, R-The Woodlands, announced Wednesday morning that this will be his last term serving in the U.S. House.

First elected in 1996, Brady is one of the most senior members of the Texas delegation and a powerful player within the House Republican conference. The announcement was widely expected as he was facing a term limit in his role as the top Republican on the House Ways and Means Committee, which legislates tax law.