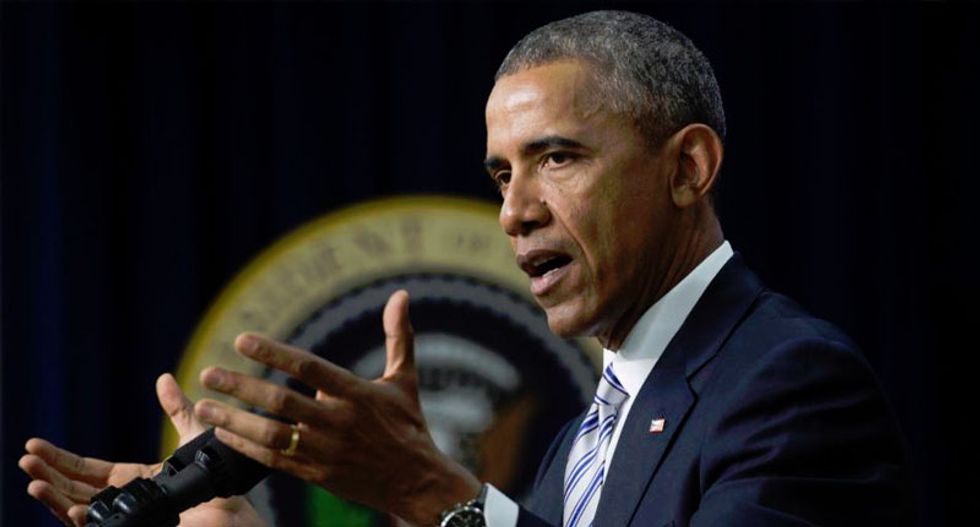 US President Barack Obama on Wednesday urged Western and Muslim leaders to unite to defeat the "false promises of extremism" and reject jihadists' claims to represent Islam.

"The terrorists do not speak for a billion Muslims," Obama told delegates from 60 countries at a White House summit on countering radicalism.

In the wake of brutal jihadist attacks in Europe and the Middle East, Obama said more must be done to prevent groups like Islamic State and Al-Qaeda from recruiting and radicalizing.

The battle, he said, was as much for hearts and minds as one waged by the military on the ground and in the air.

The "ideologies, the infrastructure of extremists, the propagandists, the recruiters, the funders who radicalize and recruit or incite people to violence," must be tackled, Obama said.

He challenged critics at home and moderate governments abroad to undercut the jihadist narrative that there is a "clash of civilizations" between an anti-Muslim west and a radicalized Middle East.

Domestically, Obama has been criticized for not describing the attacks in Denmark, France, Syria and Libya as the work of "Islamic radicals."

He chose to face down the critics Wednesday saying "we are not at war with Islam. We are at war with people who have perverted Islam."

Top US diplomat John Kerry, who on Thursday will host a higher-level ministerial meeting aimed at drawing up an action plan, called it "the defining fight of our generation."

And he poured cold water on the notion that the thousands of foreign fighters flowing to the battlefields were all motivated by religious feelings.

Two Britons, among about 4,000 Europeans who have joined IS in Iraq and Syria, had first bought copies of "Islam for Dummies" and "The Koran for Dummies," he scoffed.

But Kerry made it clear that "we're here for a simple transcendent reason, to safeguard the future for our people," saying groups like IS "want to drag us back literally into dark ages... obliterate knowledge as they destroy books and school rooms."

Communities in the United States and abroad must do their part, Obama said, stressing Al-Qaeda and IS "deliberately target their propaganda in the hopes of reaching and brainwashing young Muslims."

They do so through "high-quality videos, the online magazines, the use of social media, terrorists Twitter accounts -- it's all designed to target today's young people online in cyberspace."

The summit has been in the pipeline for months, but took on greater significance after several attacks, including on a cultural center and on a synagogue in Copenhagen which left two people dead.

Among those attending is Anne Hidalgo, the mayor of Paris, where attacks by Islamist gunmen last month on the Charlie Hebdo satirical weekly magazine and a kosher supermarket left 17 people dead.

Kerry said the challenge was to "coordinate almost as never before."

"The task before us is to combine the right partners, the right planning, the right degree of political commitment and over a sustained period of time we will win," the veteran diplomat insisted.

The US State Department announced the appointment of a special counter-terrorism communications coordinator, but it was unclear what concrete outcomes there would be.

"'I am worried about people hating Muslims,'" she wrote "'please tell everyone that we are good people, and we're just like everyone else.'"