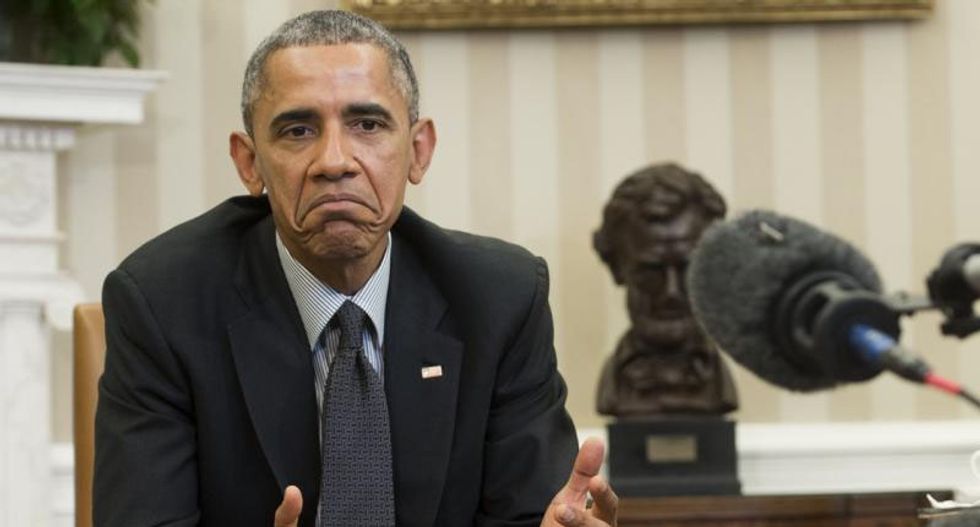 US President Barack Obama speaks about immigration reform during a meeting with young immigrants, known as DREAMers, at the Oval Office of the White House in Washington, DC, on February 4, 2015 (AFP Photo/Saul Loeb)

US President Barack Obama's tactic of using executive orders to bypass a hostile Congress and drive through controversial immigration reform has run into legal trouble.

A judge in Texas has blocked an Obama order that would have protected about four million undocumented foreigners from deportation and was due to come into effect from Wednesday.

Twenty-six states -- all but two Republican-governed -- had sought an emergency injunction against the order, which is a hot political issue heading towards the 2016 presidential election.

The states had claimed Obama's move was illegal and could oblige them to provide driving licenses and other documents at great cost.

Federal judge Andrew Hanen of the US District Court in Brownsville agreed with their argument and granted a temporary injunction Monday.

"It is far preferable to have the legality of these actions determined before the fates of over four million individuals are decided," the ruling read.

The White House called the ruling wrong, saying the president had acted within his legal authority and vowed an appeal.

Obama and his Democrat allies have tried to push comprehensive immigration reform, which could eventually bring millions of new voters, many seen as likely Democrats.

"The Supreme Court and Congress have made clear that the federal government can set priorities in enforcing our immigration laws," a statement said.

Under the Obama plan, three-year deportation deferrals and work permits were offered for undocumented immigrants who have not committed serious crimes, have been in America at least five years and have children who are American citizens or legal residents.

"The district court's decision wrongly prevents these lawful, commonsense policies from taking effect and the Department of Justice has indicated that it will appeal that decision," the White House said.

Conservative Republicans have largely opposed immigration reform, pointing to issues of security and the rule of law.

"We cannot allow one man to nullify the law of the land with either a stroke of his pen or a phone call."

But advocates for immigration reform expressed confidence that Obama's actions would eventually be ruled legal.

"We are confident that the courts will ultimately side with the scores of legal experts, state leaders, city officials, and law enforcement leaders who say that these immigration initiatives are both in full compliance with law and deeply beneficial to our communities, society, and country," said Marielena Hincapie of the National Immigration Law Center.

Controversy over both executive orders and immigration reform is likely to burn on until the 2016 election.

Obama has issued a slew of executive orders -- touching on North Korea sanctions, abortion, anti-gun-violence, the environment and a host of other issues.

Republicans, who since last year's mid-term elections have controlled both the House of Representative and the Senate, accuse Obama of being authoritarian.

"The president said 22 times he did not have the authority to take the very action on immigration he eventually did, so it is no surprise that at least one court has agreed," said Republican House Speaker John Boehner.

Historians point out that previous presidents have made extensive use of executive orders.

President Franklin Roosevelt used an executive order to establish internment camps during World War II and Abraham Lincoln used two to set out the Emancipation Proclamation, according to the National Constitution Center.