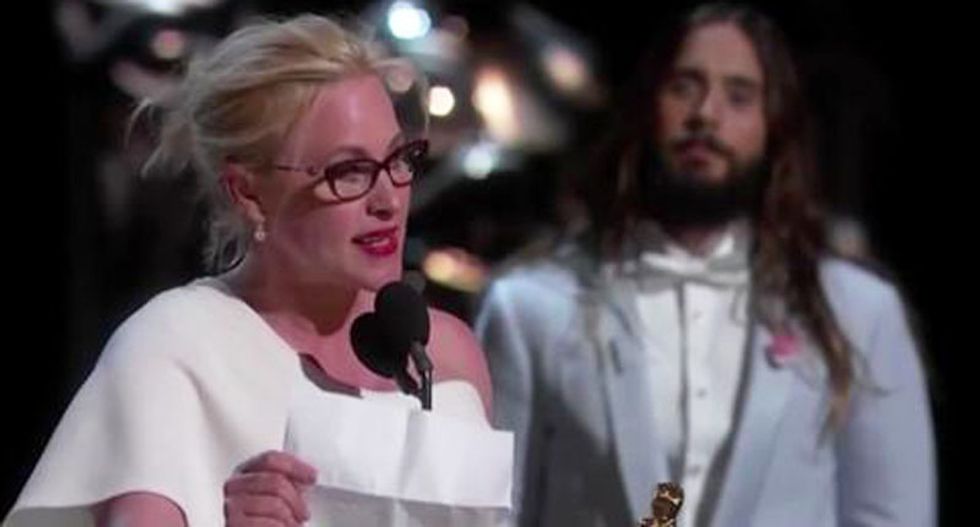 Welp, we did it again.

Every few months or so progressives (the term of choice for high-maintenance liberals) launch a jihad on an unsuspecting ally for the crime of "not using their words properly," and the focus shifts from real world problems to semantics and this, to put it politely, is why shit doesn't get done.

Sunday night at the Oscars, Patricia Arquette made an impassioned -- but frantic due to time constraints -- appeal for equal pay and equal rights for women.

To every woman who gave birth, to every taxpayer and citizen of this nation, we have fought for everybody else’s equal rights! It’s our time to have wage equality once and for all and equal rights for women in the United States of America!

Outside of a Fox News nitwit, who can argue with that?

However, if you are to believe certain activist factions whose hobbyhorse Arquette failed to ride, she destroyed everything they have ever worked for with her off-the-cuff comments backstage when she said:

One of those superior court justices said two years ago in a law speech at a university that we don’t have equal rights for women in America, and we don’t because when they wrote Constitution, they didn’t intend it for women. So the truth is even though we sort of feel like we have equal rights in America, right under the surface there are huge issues at play that really do affect women. It’s time for all the women in America, and all the men that love women and all the gay people and all the people of color that we’ve all fought for — to fight for us now!

What should have been a call to arms for everyone to get behind a very basic and simple human right became a very horrible terrible awful bad thing because Arquette failed to properly express herself using approved terminology with appended footnotes and peer-reviewed study citations.

In a quicky presser.

Backstage at the Academy Awards.

Less than twelve hours after Arquette spoke, Katie McDonough wrote at Slate (under the classic Slate-pitch headline: "What Patricia Arquette got right (and wrong) about equal pay"):

And in a speech that is directly about equal pay, Arquette’s call for solidarity from “all the gay people and all the people of color” ignores the fact that the wage gap for women of color and LGBTQ women is much, much worse than it is for straight white cis women.

I won't even get into the usage of "cis," which is the "fetch" of gender studies chit-chat, but it is worth noting that Arquette called for wage equality for all women, and, to mangle in old expression: a rising wage tide raises all women's boats, regardless of a more detailed taxonomy.

Part of the push-back at Arquette was an off-shoot of anger at the Oscar nominations being "too white," giving complainants a more specific target to shoot at, and that drew in women of color feminists who have been engaged with white feminists in a cold war for years that will never end.

Of particular note was the recent ugliness between Nicole Sandler and Elon James White, after Sandler defended Arquette, only to be accused of being complicit in the "erasure of WoC within the larger feminist movement."

Complaining that other defenders of Arquette were saying that the big picture was being lost due to what I think of as nitpicking cultural pointillism, White wrote:

The happiness they had over Arquette’s very high-profile callout against wage discrimination made it much harder for them to hear those who found the backstage commentary concerning LGBTQ and PoC problematic. “We’re on the same team,” I was told. “We shouldn’t be eating our own,” they exclaimed. The idea that intersectional erasure of Women of Color and LGBTQ women was a byproduct of Arquette’s comments wasn’t just a problem, but another example of a continuous problem within feminism was lost.

The problem, of course, is that circular firing squads are counter-productive and to assert such an obvious point is to somehow retreat into "white privilege" and therefore not worthy of consideration.

And that is bullshit (He wrote, knowing full well he will be accused of "male white privilege" and told to "check it").

Change comes when we all pull together and, yes, change comes way too slowly in this big stupid lumbering dumbass country of ours. But it comes even more slowly when it becomes mired in petty squabbles over terminology or "that person said it wrong; here is what I would have said."

And that is why we can't have nice things.