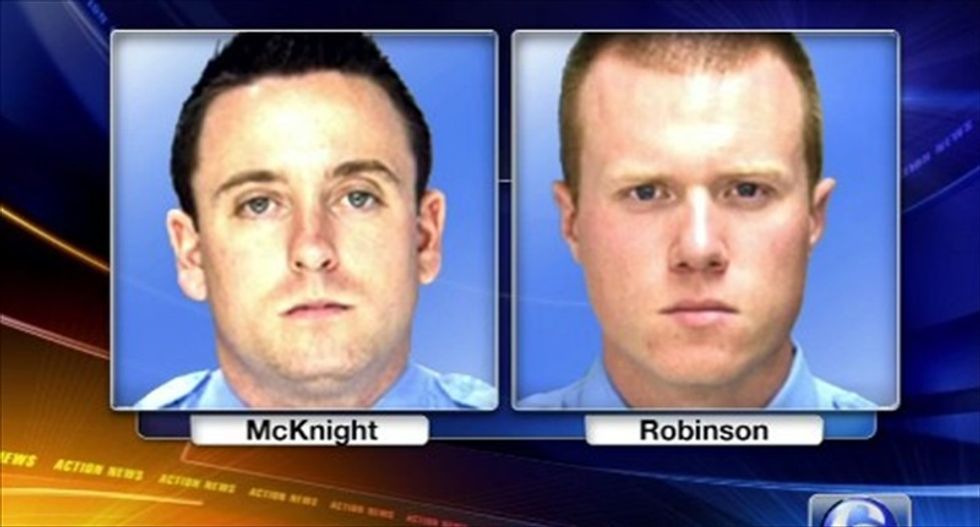 Two Philadelphia police officers were arrested and publicly criticized by local officials after video proof emerged that they lied about pursuing and beating a man, WPVI-TV reported.

The footage shows Officers Sean McKnight and Kevin Robinson chasing 23-year-old Najee Rivera in their unlit patrol car and knocking him to the ground with a baton before pushing him against a wall and repeatedly hitting him. Rivera can be heard screaming throughout the attack.

"He never resisted. He never struck them," local District Attorney Seth Williams said of the May 2013 incident. "He never fought back. They just started hitting him."

The encounter began when the officers pulled Rivera over. Rivera reportedly fled out of fear for his safety. But the officers originally said that Rivera fell off of his scooter, then tried to grab one of their batons, forcing one of them to hit Rivera in the face. He was originally charged with resisting arrest.

But Rivera's girlfriend recovered the video from a nearby business before the case went before a grand jury. The charges against him were dropped. He subsequently won a $200,000 settlement in a federal civil rights lawsuit he filed against the city. The two officers were taken off of street duty after the video came to light.

"The video undermined every aspect of the officers' account of the incident," Williams said.

The Philadelphia Inquirer reported that the arrests came a day after two other officers, Jonathan Garcia and Sydemy Joanis, were convicted on corruption charges.

Watch WPVI's report on the arrest of the two officers, as aired on Thursday, below.