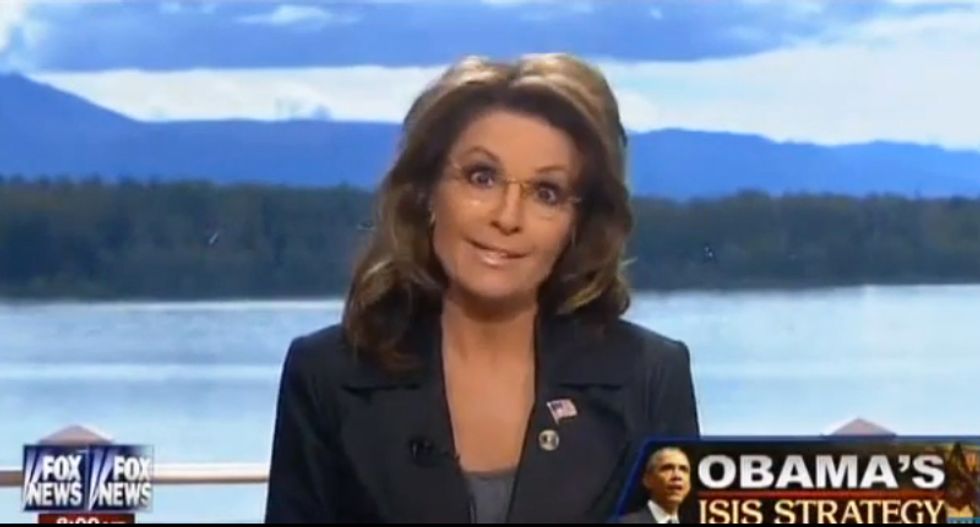 Punchline to 48 percent of all jokes --including those told in North Korea --  grammar rogue Sarah Palin has had it up to the very tippy-top of her Bumpit with the 'lamestream jackal pack media,' and their lying whore-mouth ways.

Wait. Hasn't she done this before? Why, yes, yes she has:

What? Lamestream calls for empathy, even outrage, for a First Amendment violation that's on par with all the abuse we've brought to your attention as Obama stomps on our Constitution. You've IGNORED us, you've marginalized us, you've left us for "destroyed." But when Obama's boot is on YOUR neck you finally wake the h*ll up and cry foul? Good Lord.

But that was then and this is now and this time  IT IS PERSONAL because NBC 's Brian Williams inflated his war correspondent resume which is why we lost the Iraq war -- or maybe we tied with them. I can't remember.

NBC Nightly News anchor Brian Williams admitted Wednesday he was not aboard a helicopter hit and forced down by RPG fire during the invasion of Iraq in 2003, a false claim that has been repeated by the network for years.

On her Shoutyface page, Palin Mama Grizzly-attacked Williams, who is well known to most of America because his daughter was once Peter Pan and also  once  had her butt eaten on TV on two different shows -- both of which could have been improved, educationally and artistically  speaking,  by merging the scripts.

It's said that a man's word can affect the course of history. Certainly a man with a microphone can. Mainstream media lies. Without accountability their power can influence national debate, shift momentum, and destroy a person's good name. All affecting history.

When one of their own repeats a lie for 12 years but is excused with the help of the media's herd mentality, tragic distrust and despondency blankets our land. The veil is torn, however, with the revelation of exaggerated, self-centered falsehoods like NBC's perpetual lie that belittled our soldiers and their truly courageous missions. The face of that network’s news lied about combat experiences in Iraq and then with false humility accepted the title of "war hero" while the press ignores, disrespects, and often destroys the good name of our true war heroes. To me, that's like soiling sacred ground.

However will we escapet from beneath this "tragic distrust and despondency blanket" ?

Well, for a start, Williams' story -- dumb as it was --  wasn't entirely bullshit:

According to Rich Krell, who piloted the Chinook helicopter in which Williams was riding during the Iraq invasion in 2003, the vehicle did receive enemy fire, just not from an RPG. He also said there were just three helicopters flying together — with his being the middle one — and not four as Williams previously stated. It was the “first bird” flying out in front that was struck by the RPG and forced to land.

“Yeah, he messed up some things and said some things he shouldn’t have,” Krell said of Williams. “I [first] heard it a few years ago…. Actually one of my flight engineers said, ‘Did you hear him say that? Wasn’t he on our bird?’”

But he apparently was not terribly offended by Williams exaggerations, saying, “After a while, with combat stories, you just go ‘Whatever.’”

Why does Rich Krell hate America and the military and, by extension,  himself? Brian Williams obviously told a half-truth -- like , for example, someone saying they were the governor of Alaska, even though they quit midway through their first term because governoring is hard AND boring.

Is Sarah Palin going to let NBC off the hook for standing by liar-liar-pants-on-fire Brian Williams? No sir-eee, Bob.

Also, too, Sarah Palin has signed on to appear on NBC on Saturday Night Live's 40th Anniversary special on Feb. 15th.