Sec. of State John Kerry: Russia is lying 'to my face' about having troops in Ukraine 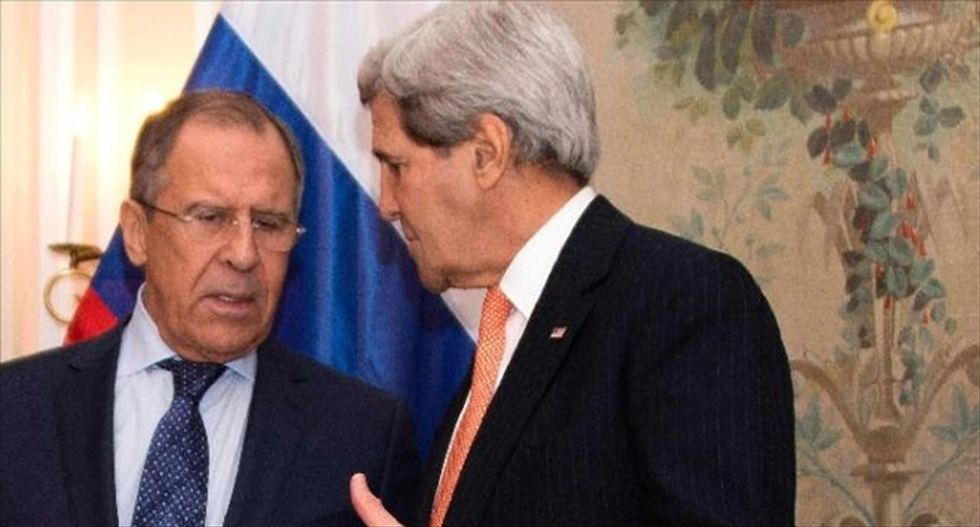 U.S. Secretary of State John Kerry on Tuesday accused Russian leaders of lying "to my face" about Moscow's involvement in the conflict in Ukraine and denounced what he called Russia's "propaganda."

The top American diplomat refused however to say publicly whether he was in favor of sending U.S. weapons to Kiev to help the Ukranian military battle the pro-Russian rebels in the east.

"Russia has engaged in a rather remarkable period of the most overt and extensive propaganda exercise that I've seen since the very height of the Cold War," Kerry told US lawmakers.

"And they have been persisting in their misrepresentations -- lies -- whatever you want to call them -- about their activities there to my face, to the face of others, on many different occasions."

Kerry has met multiple times in European cities with Russian Foreign Minister Sergei Lavrov since the crisis erupted in early 2014.

Asked whether Russia was lying when it denied that there were Russian troops or weapons in Ukraine, Kerry replied: "Yes."

"Russia is engaged in a massive effort to sway nations, to appeal to them, reach out to them, and fundamentally, tragically, sort of reigniting a new kind of East-West zero sum game that we think is dangerous and unnecessary, frankly," Kerry said.

He insisted Washington was "doing a pretty good job of standing up for Ukrainian sovereignty."

The US administration of President Barack Obama is discussing whether to increase its support to Kiev to include lethal weapons.

"Until the president makes his decision, I'm going to keep my consultations personal and private with him," Kerry said, when asked whether he would support sending in heavy weapons.

But he urged the world and Congress to increase its economic support for Ukraine.

"We all need to be prepared to step up and be there economically for Ukraine as they reform and try to implement their dream and vision," Kerry told the Senate appropriations committee at the start of two days of budget hearings.

"It's not good enough to have (President Petro) Poroshenko come here and get 40 standing ovations, and then not step up and deliver what it's really going to take to help him create the democracy he wants to create."

The foreign ministers from France, Germany, Russia and Ukraine met in Paris Tuesday in a fresh push to salvage a crumbling peace plan for eastern Ukraine that they hammered out in the Belarussian capital Minsk 12 days ago.

The ministers renewed calls for a total ceasefire in eastern Ukraine as London announced it was sending troops to train Ukrainian government forces.

A disturbing video has emerged on social media, showing a man who has been identified as a U.S. Army sergeant harassing and threatening a Black man who was walking through a South Carolina neighborhood.

The video, first uploaded to Shirell Johnson's Facebook page, shows a man identified by social media users as U.S. Army sergeant first class Jonathan Pentland walking alongside a young Black male only identified as Deandre, asking him what he's doing in the neighborhood and aggressively telling him to leave. At one point in the video, Pentland pushes Deandre.