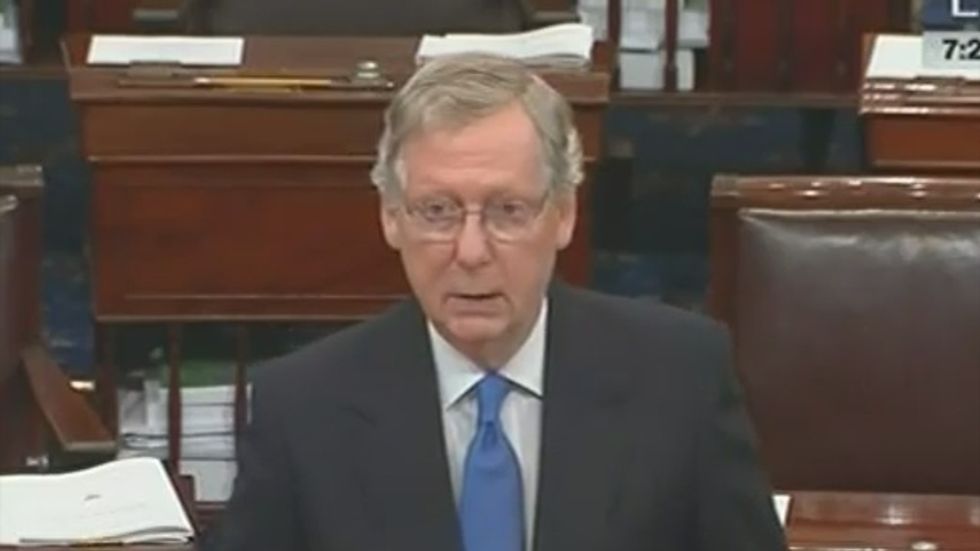 The Senate on Friday approved a one-week stopgap funding bill to avert a partial shutdown at midnight of the U.S. domestic security agency, leaving it up to the House of Representatives to either approve the bill or let the shutdown go ahead.

The Senate backed the short-term measure on a voice vote just hours after the House rejected a three-week extension of spending authority for the Department of Homeland Security (DHS).

Hoping to propel it to passage, House minority leader Nancy Pelosi urged support in a letter to fellow Democrats.

In a stunning rebuke to House Speaker John Boehner, Republican conservatives refused to back the three-week funding extension for the agency, which heads domestic counterterrorism efforts, unless the bill also blocked executive orders on immigration issued last year by President Barack Obama.

The surprise move by defiant House Republicans left their leader Boehner, who has struggled to control his troops, scrambling for alternatives with just hours before the Homeland Security spending authority was to expire.

Obama convened a meeting at the White House with security and budget officials and called Democratic leaders in Congress for an update on efforts to keep the lights on at the agency.

The political battle was triggered by Republican efforts to use the Homeland Security spending bill to block funding for Obama's executive orders that lifted the threat of deportation for millions of undocumented residents.

If current Homeland Security funding is not extended by Friday at midnight, spending authority will be cut off for the agency that secures U.S. borders, airports and coastal waters. The agency would be forced to furlough about 30,000 employees, or about 15 percent of its workforce.

Nearly 200,000 workers, including airport and border security agents and Coast Guard personnel would stay on the job, but would not be paid until new funding is approved.

Created after the Sept. 11, 2001 attacks, the department is a super-agency that encompasses the Coast Guard, the Secret Service, the Transportation Security Administration and immigration, customs and emergency management authorities.

Fifty-two House Republicans voted against the three-week extension that excluded the immigration funding restrictions. Many conservative Republicans had demanded that any spending bill include those provisions.

"We have some disagreements on tactics among conservatives," said Representative John Fleming of Louisiana, a Tea Party favorite who voted against the stopgap.

Fleming criticized Boehner for not pushing harder to kill Obama's executive order. Asked if House leadership should change, he said: "Obviously, we're not getting good results."

All but 12 of the House Democrats who voted on the stopgap measure opposed it, arguing the funding should be extended for the full fiscal year.

The Senate earlier on Friday had approved a full-year, $39.7 billion funding measure for Homeland Security, which also excluded the restrictions on Obama's immigration order.

"The Republican Congress has shown that it simply cannot govern," Senate Democratic leader Harry Reid said after the vote.

Last November, the president issued orders, without going through Congress, that lifted the threat of deportation for millions of undocumented residents. A federal judge put a temporary hold on the orders.

It was unclear if Boehner could take up the Senate bill. If he did, he would risk angering House conservatives.

Obama and Homeland Security officials have warned that even a short, partial shutdown could hurt the agency, interrupt hiring and create more uncertainty for a department that spearheads domestic counterterrorism efforts.