St. Louis cop caught warning fellow officers not to arrest suspect until she turns off dashcam 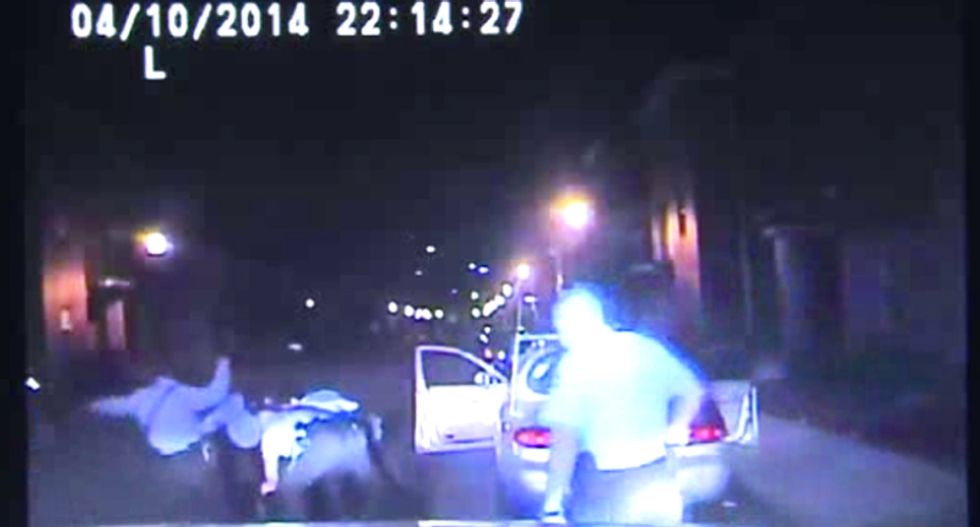 In dashcam video released as evidence in an excessive force lawsuit against the St. Louis Police Department, an officer is heard warning her fellow officers to "hold up" with the arrest until the camera can be turned off, the St. Louis Post-Dispatch is reporting.

The video, which has been held back since April 10, shows the suspect being dragged from a car, beaten, and kicked by up to seven officers while resisting arrest.

Lawyers for the suspect, Cortez Bufford, 18, released the video after filing the lawsuit on Jan. 22. The video was previously used as evidence to have charges dropped against Bufford.

In the video, police can be seen attempting to take Bufford and a companion into custody after receiving a 911 call about shots fired. As Bufford's companion exits the vehicle and is handcuffed, officer Nathaniel Burkemper argues with Bufford through the car window before reaching inside and opening the car door.

As Burkemper struggles with Bufford, pulling him from the car, multiple officers rush in, kicking him repeatedly while shocking him with a Taser. According to the police report, Burkemper warned the other officers that Bufford had a gun.

Police recovered a 9mm semi-automatic pistol with four rounds in the magazine and one in the chamber from Bufford.

When officers attempt to get the suspect to his feet, an officer identified as Kelli Swinton warned them "we're red now," indicating the dashcam was recording.

"Hold up, hold up, y'all. Everybody hold up," she can be heard saying near the end of the video."It's red right now, so if you're worried about cameras, just wait," before the video cuts off.

A separate dashcam video recorded what happened after  Burkemper’s camera was turned off, with officers huddled around Bufford.

That camera shuts off too, leaving a gap of more than two minutes before Bufford is seen stumbling and falling once as he’s taken to a police vehicle.

A lawyer for the St. Louis Police Officers’ Association stated that the video reflects a proper use of force used against an armed suspect reaching for a gun.

Bufford was initially charged with unlawful use of a weapon and a misdemeanor of resisting arrest, but those charges were dropped on Aug. 26.

A police spokesman said the officer who turned off the camera  “has been recommended” for discipline, but is appealing.

Watch the video below from the St. Louis Dispatch/Fox2: