Strauss-Kahn lashes out at court for focus on sexual preferences 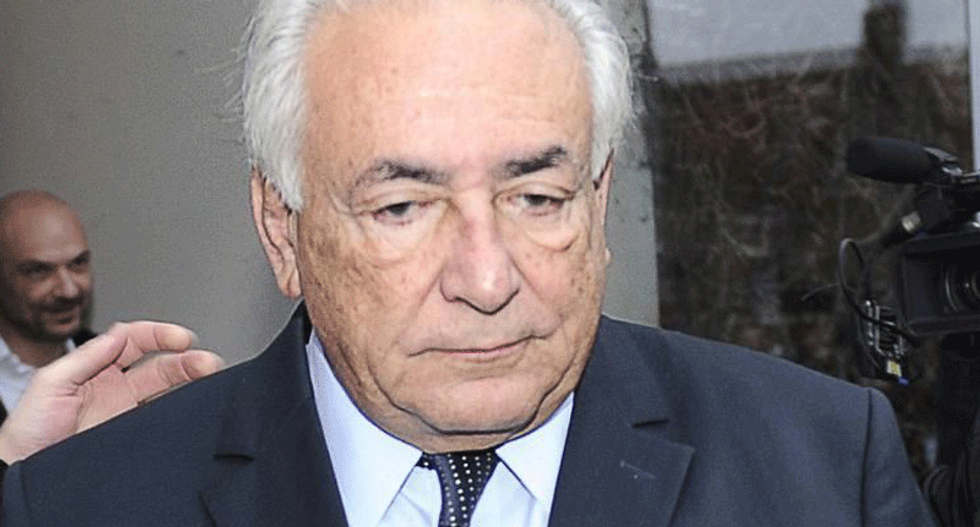 Former IMF chief Dominique Strauss-Kahn on Wednesday lashed out at the focus on his sexual behaviour in a French court where he is charged with pimping, saying he was not on trial for "deviant" acts.

The 65-year-old, once seen as a frontrunner for the French presidency, said the idea that his preference for certain practices highlighted in court, such as sodomy, would spur him to seek out prostitutes was "absurd."

For a second day, the court in the northern city of Lille picked apart sex parties attended by Strauss-Kahn in Paris, Brussels and Washington in a bid to uncover whether he arranged for prostitutes to attend.

While prostitution in itself is legal, encouraging and organising its practice is considered to be procuring and is punishable by up to 10 years in prison.

Strauss-Kahn denies knowing that the women with whom he engaged in "free and friendly" sex parties were prostitutes, saying paying for sex would be too great a risk for a man at the head of the IMF, which was busy "saving the world from an unprecedented" financial crisis.

Wednesday's proceedings began with an emotional account from Jade, an ex-prostitute, about a night in a Brussels hotel where she said Strauss-Kahn sodomised her without permission, in what she said was a clear sign he knew she was paid to be there.

Jade sobbed as the court pushed her to recount the evening.

"I experienced a penetration without my permission. If I was a libertine, I would at least have been asked if I wanted to do that," she said, adding she had not had time to protest.

Strauss-Kahn said he did not realise she objected and was "sorry" she experienced it that way.

The silver-haired economist, who has spoken confidently and been unflappable when questioned, lost his patience when a lawyer for the prostitutes interrogated him on the act.

"I am starting to get fed up," he said, adding people were free to disagree with his proclivities, but that he was not on trial for "deviant sexual practices."

Much of proceedings were taken up with accounts of a trip by Jade and friends of Strauss-Kahn to visit him in Washington, and whether the then-IMF chief asked for a prostitute to be brought along.

It emerged Strauss-Kahn had taken Jade on a visit to the IMF, and judge Bernard Lemaire passed around a picture of her smiling alongside him in his office. However Strauss-Kahn said if he had known she was a prostitute it was 'inconceivable' that he would have taken the risk of taking her to his place of work.

Lemaire asked Jade why she had agreed to the trip which took place in January 2010.

Jade said that while Strauss-Kahn's entourage had asked her to be "discreet" and pretend she was a secretary on the trip to Washington, she had previously had a conversation with him in which she mentioned she worked at a swingers club.

"There is naive and then there is naive. We are not stupid. It is easy" to say Strauss-Kahn did not know they were prostitutes, she said.

Businessmen Fabrice Paszkowski and David Roquet have admitted to organising and paying for the trip to Washington.

Paszkowski said he never told the former IMF chief -- a close friend -- he had paid the women to attend, as he would have been ashamed to do so.

Strauss-Kahn said Tuesday that as an unabashed libertine, the fun for him lay in the "playful party atmosphere" and that the presence of prostitutes would render such soirees seedy.

"I am horrified at the practice of using prostitutes," he said.

Strauss-Kahn also objected to the impression given by the prosecution of a "frenetic" schedule of sex parties, saying he only took part in such "recreational outlets" four times a year between 2008 and 2011.

Known in France as DSK, Strauss-Kahn finds himself back in the dock four years after his high-flying career and presidential prospects were torpedoed when he was accused of sexual assault by a New York hotel maid, a case later settled in a civil suit.

He is the most high-profile of the accused who include a colourful cast of characters, including police, a prostitute, a lawyer and a notorious brothel owner known as "Dodo the Pimp."

Strauss-Kahn's only female lawyer in his defence trio has been tasked with cross-examining the former prostitutes.

Frederique Baulieu on Tuesday presented evidence from a girlfriend who accompanied Strauss-Kahn to a party and described it as "free and friendly" -- prompting judge Bernard Lemaire to say "this shows people have different views of libertinism".