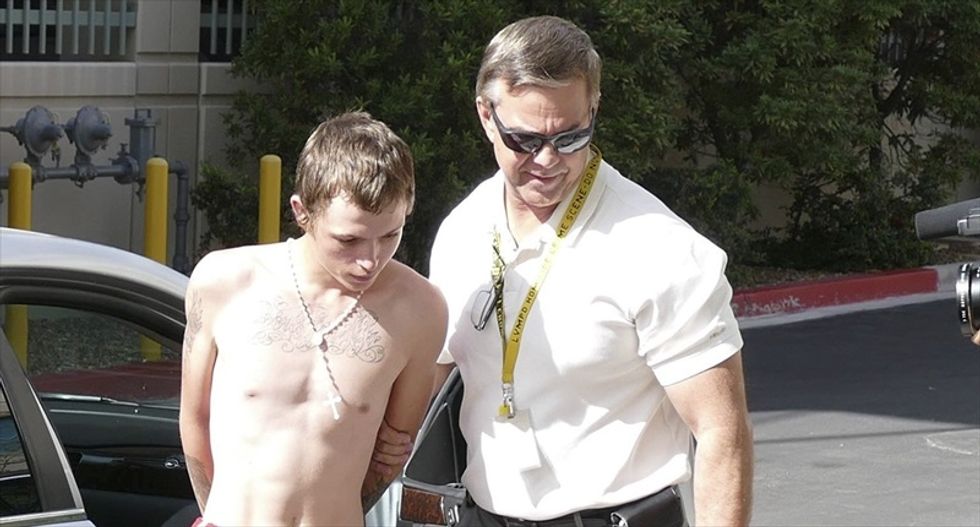 The 19-year-old man charged with killing a mother of four following a confrontation on the streets of Las Vegas excitedly told friends hours later that he had shot some "kids" who had been after him, arrest warrants made public on Friday show.

According to the documents, Erich Milton Nowsch told the two friends he fired 22 times at a green car after a cat-and-mouse car chase through his neighborhood just a few miles from the famed Las Vegas strip, and knew that he had shot someone when it was over.

Tammy Meyers, 44, was struck by a single bullet to the head on the night of Feb. 12 while in her green Buick Park Avenue outside her home. She died two days later after being taken off life support.

Police say Meyers was shot minutes after she was involved in a road-rage altercation with the occupants of a silver sedan, while heading home after giving her 15-year-old daughter a driving lesson.

Nowsch was arrested on Thursday at a home just blocks from the scene of the shooting, which stunned the desert resort city, and was charged with murder and attempted murder. Police say they are still searching for at least one more suspect.

During the incident, a man got out of the sedan and threatened: "I'm gonna come back for you and your daughter," according to the girl's account of the incident, which is also contained in the documents.

Police say that after that threat Tammy Meyers drove home, dropped off her daughter. Her 22-year-old son, Brandon, got in the car carrying a loaded handgun.

Brandon Meyers told police that his mother then pursued the silver sedan. A passenger fired at them before the two vehicles met up in front of the Meyers home.

There, he said, the passenger shot at them again and Brandon Meyers returned fire. He saw his mother lying on the ground, bleeding from the head.

According to the warrants, Nowsch's two friends told detectives he came to their apartment and told them that he "got those kids, they were after me, and I got them," according to the affidavit. Nowsch also showed them a handgun.

Nowsch denied involvement in the shooting when questioned by police, according to the documents. He is scheduled for an initial court appearance on Monday.