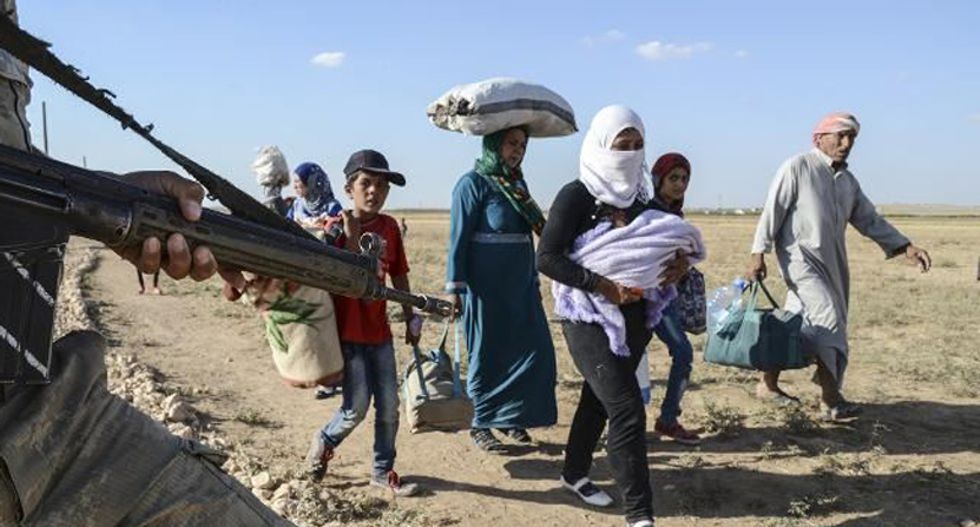 Syrian Kurds carry their belongings after crossing into Turkey near the southeastern town of Suruc in Sanliurfa province, on September 19, 2014 (AFP)

Ten children were among at least 48 people killed in a Syrian village this week when regime forces executed six families of rebel fighters, a monitoring group said on Saturday.

Tuesday's executions took place in the village of Rityan, north of second city Aleppo, after regime forces entered that day during an offensive aimed at cutting rebel supply lines to the Turkish border, the Syrian Observatory for Human Rights said.

The Britain-based monitor said that villagers had discovered the bodies when they returned to their homes after the regime forces withdrew a day later.

Five women and 13 rebels from the six families were among the dead.

"The troops and militiamen knew exactly where they lived thanks to the informers who accompanied them," Observatory director Rami Abdel Rahman said.

"There was no resistance except in one house where a rebel opened fire at troops before being executed along with his family," he added.

Activist Mamun Abu Omar said some of the bodies had been mutilated.

The brief seizure of Rityan was part of an abortive army offensive launched this week to try to encircle the rebel-held east of Aleppo and relieve two besieged Shiite villages to its north.

By Friday all but one of the villages initially taken by government forces had been recaptured by the rebels, who include fighters of Al-Qaeda affiliate Al-Nusra Front.

The heavy fighting claimed the lives of 129 regime loyalists and 116 rebels, including an Al-Nusra commander, according to an Observatory toll.

While the ground offensive failed, regime warplanes kept targeting rebel areas of Aleppo city and other parts of the country.

On Saturday, eight people -- among them two women and two children -- were killed when a barrel bomb hit a building in an opposition-held area of Aleppo city, once Syria's commercial capital.

Five people were also reported killed in rebel shelling of regime-held areas of the city.

The air force also killed at least seven people in rebel areas east of Damascus on Saturday, the Observatory said.

According to the monitoring group, they were the latest of nearly 6,000 people killed across Syria since the UN Security Council passed resolution 2139 on February 22 last year.

The Observatory "has documented the killing of 5,812 civilians, including 1,733 children, 969 women and 3,110 men in barrel bombings and (other) air raids" over the past year.

The raids have continued despite Resolution 2139, which ordered all sides to end their "indiscriminate employment of weapons in populated areas, including shelling and aerial bombardment, such as the use of barrel bombs".

Syria's conflict began as a peaceful pro-democracy revolt but morphed into a civil war that has killed more than 210,000 people since March 2011.