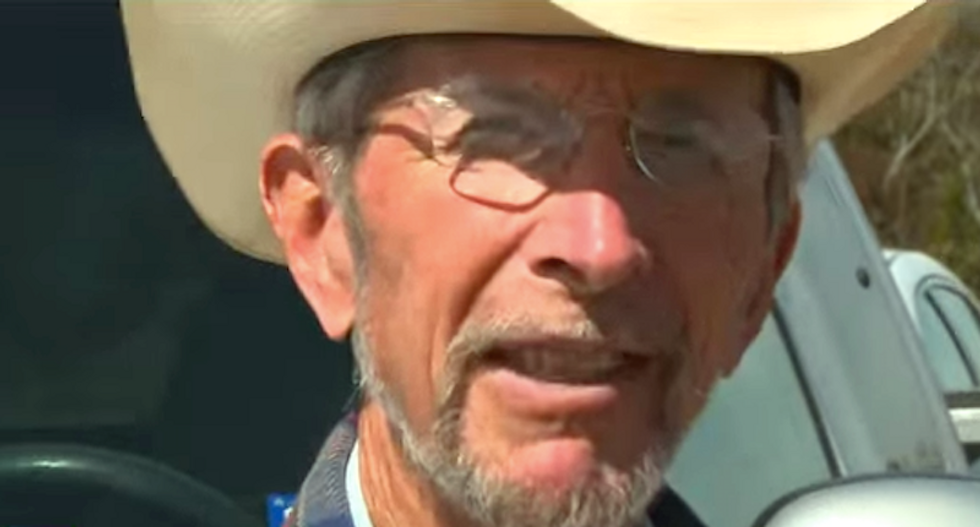 A group of Texas secessionists had their meeting busted up by law enforcement officers, and they can’t understand why.

"We had no idea what was going on," said John Jarnecke, president of the Republic of Texas. "We knew of nothing that would warrant such an action."

He claims the raid violated the group’s constitutional right to peacefully assemble.

“As if dangerous criminals, many of the Texian (sic) people — generally seniors of respected middle-class business, farming, broadcasting, engineering, scientific, health, veterans and faith-based backgrounds — were one-by-one physically searched on their person and in their vehicles, finger printed, detained and then had their personal belongings and property searched and seized," Jarnecke said in a statement.

At least 20 officers from a variety of federal, state, and local law enforcement agencies took part in the “show of force” in response to legal summons sent by group members to a Kerr County judge and bank employee, who were ordered to appear in a Republic of Texas “court” at a VFW hall in Bryan, reported the Houston Chronicle.

The judge and banker had been involved in the foreclosure of Republic member Susan Cammak, who signed the phony court summon along with David Kroupa, a Republic of Texas judge.

"You can't just let people go around filing false documents to judges trying to make them appear in front of courts that aren't even real courts," said Kerr County Sheriff Rusty Hierholzer, who organized the raid.

The officers served a misdemeanor search warrant over his concerns that group members could become violent, citing a 1997 standoff between a Republic of Texas member and about 300 state troopers.

Investigators searched and fingerprinted about 60 people at the Feb. 14 morning meeting and then seized all their cell phones and recording equipment, along with gold, silver, and thousands of dollars in cash.

The group’s president admits Republic of Texas members are plotting to secede from the United States, but he denies any involvement with armed plots or violent extremists.

"We've had years of bad press, but we're not those people," Jarnecke said. "But yes, we are still making every attempt to get independence for Texas and we're doing it in a lawful international manner."

Group members maintain that Texas was illegally annexed in 1845 by the U.S., and they view elected officials as tyrannical “kings and emperors” and operate their own parallel government.

"This is the century for colonialist ambitions to be reversed," said Robert Wilson, a pastor who serves as a senator in the Republic. "I've watched a lot of things happen, and the people of the world are fed up. The spirit of the world right now is: (to) make things smaller, move governments closer to home, take back self-rule."

Republic members are trying to gain international recognition in world courts of an independent Texas, and they insist their efforts are perfectly legal – although the sheriff disagrees.

"We've had a lot of dealings with Republic of Texas members in the past here, too, flooding the court with simulated documents," Hierholzer said. "I don't have any problem with them going back to the Republic of Texas, but they need to do it through the proper legal channels."

The warrant authorized investigators to seize all computers, media storage, software, cell phones, and paper documents – which the sheriff said would be examined to determine whether other group members conspired to create and issue the phony court documents.

Group members present at the meeting were each searched and fingerprinted, but officers did not perform cheek-swab DNA tests as the warrant permitted.

No arrests were made, and the case remains under investigation.

Watch this documentary about the Republic of Texas posted online by RT: