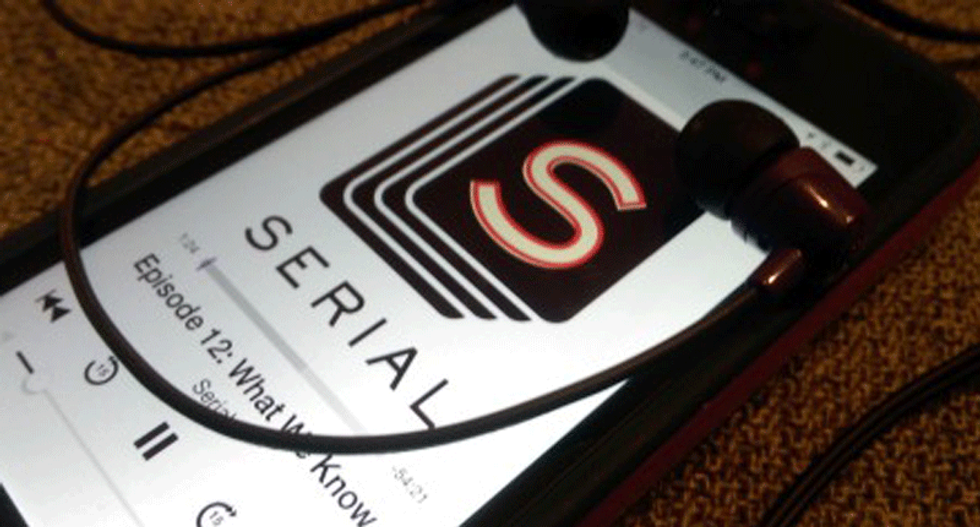 Emily Shire and Ben Collins at The Daily Beast have written a disturbing article about how the fandom around the podcast Serial has resulted, with an almost depressing inevitability, in misogynists running rampant, doxxing women who have opinions they disagree with on the show and otherwise being harassing asshats. Since the crime at the center of the show is almost certainly a gendered crime---all plausible theories about who killed Hae Min Lee center around the idea that her gender played a role in why she was targeted---the fact that dudes with serious issues regarding women were going to get involved isn't a big surprise. But for people who are lucky enough not to be well-acquainted with online misogyny are likely to think that the Serial harassment brigades are supportive of Adnan Syed's claims to be innocent of his ex-girlfriend's murder. After all, there is a knee-jerk support in their midst for most men accused of rape or domestic violence, regardless of how much evidence there is against them.

But, in fact, the situation is even weirder. Women who believe there's a chance that Syed is innocent are the ones who are getting the brunt of the abuse: Blogger Susan Simpson who writes mostly in Syed's defense, Syed's defender Rabia Chaudry and host Sarah Koenig herself are the targets of some of the worst vitriol.

Koenig is often accused of being in love with Adnan. Therefore, these accusers often argue, her lust has made her an untrustworthy reporter. Sometimes, there’s a moderated twist of claims that Koenig is “too emotional” or shows too much feeling—characteristics often negatively associated with women in positions of power.

Rabia Chaudry, a family friend of Adnan who has been featured on Serial and has been an outspoken advocate for him, has also been accused of having ulterior romantic motives behind her efforts to exonerate him. In a Reddit thread titled “Theory: Rabia is in Love with Adnan,” one user wrote Rabia “has said on many occasions that she loves him although she disguises it as a sort of familial affection, even though they are not in the slightest related.” The post gets odder suggesting Rabia has “hybristophelia [note: it’s actually spelled hybristophilia],” which is the state of being brought to sexual arousal or orgasm by knowing a partner has done something horrible like committing a crime.

“It could be a touch of that, if you can get a touch of that,” says the post. “And here I am guessing but I think a very high proportion of his support here on Reddit is from women… It certainly would explain the blind irrationality of her [Chaudry’s] position, the fundraising etc.”

To understand what is going on here, it's important to understand that most misogynists don't self-identify as misogynists. On the contrary, they often justify their hatred of women by saying that they are victims of women. Of course, what they identify as behavior from women that "victimizes" men is very telling, because it's usually some form of women not being deferential or self-sacrificing to men. By far, one of the most common claims of victimization is the Nice Guy® lament. "Nice guys", the lament goes, earn women's love and affection by not being overtly cruel to them or even acting like you care about a woman as a friend. (Demonstrating friendly care towards a woman is treated like a big-time sacrifice. Because nothing says you're not a misogynist like acting like it's ridiculous for women to believe any man could actually enjoy their company.) But instead of giving their attentions and vaginas to these great American heroes who have sacrificed so much by treating women with a modicum of decency, they say, women instead give their love to men who rape and abuse them. Because women are the worst, say these non-misogynists.

This is a narrative that gets lots of popular support, by the way:

What makes this particular line of bullshit so aggravating, on top of how irritating nonsensical self-pity is, is that these guys tend to seek out stories of women suffering from abuse at the hands of partners and they use this as "evidence" of the supposed victimization of Nice Guys®. You see, when a man hits a woman, you silly feminist types might think that she is the victim here. But in reality, she is the victimizer, because she gave her sexual attentions to this abuser instead of a Nice Guy® who would supposedly never do such a thing even though, you suspect upon reading enough Nice Guy® laments, he would really, really want to. In this way, even domestic violence against women is reframed as an issue of how women need to do more for men. It's truly perverse. But not misogynist, no way!

Which brings us to Serial. For the 2 or 3 of you left who did not listen to this podcast, the case of Serial is an alleged domestic violence murder. Syed was convicted of killing his girlfriend, based largely on the testimony of a friend who claimed to have helped bury her body, in revenge for her dumping him and moving on. However, a lot of people don't feel the prosecution made the case. I'm not here to debate that, just to note that a lot of people making this argument are definitely not trying to justify domestic violence, but just don't think there's any evidence that this was what was going on.

But, you know how the Nice Guy® brigade thinks, you can see how they would distort this story to their paranoid worldview. In that view, Syed is what they frequently call an "alpha male": A predator whose violent nature causes panties to melt off bodies, and the fact that attractive women have taken an interest in his case "proves" all their paranoid claims about how women are fundamentally broken and confident, handsome men of the sort Syed is characterized as, are all secretly evil. And how they're the real victims here, which is an especially alarming point of view to take in light of the fact that this all started with the actual murder of an actual human being, Hae Min Lee.

What is particularly brutal about this is that, if in fact Syed did murder Lee out of jealousy and a desire to control, then the story at the center of this is actually proof against the Nice Guy® claims that women find it intriguing and sexually arousing to be misused by men. Lee dumped Syed, after all, and proponents of his guilt argue she did so because she was becoming increasingly worried that he might be possessive and abusive. And even if you don't think Syed did it, there's evidence that one of the reasons Lee dumped him is she was worried about him being possessive. The fact that a bright, attractive young woman like Lee did not, in fact, find it sexually intriguing to be subject to controlling behavior should jack with their theory about how women want to be abused.* But that is being ignored in favor of making lurid accusations of sexual interest at any woman who asks questions about whether Syed's guilt was really proved beyond reasonable doubt. It's a classic example of bending the facts to fit the narrative, no matter how badly they fit.

*It is true that many women do stay with abusive or controlling men. But,  Nice Guy® claims to the contrary, this is despite, not because, of the abuse. Your average victim of domestic violence is stuck on the hope that their guy will change, which is something he's probably promised. Nor is there any evidence that women are drawn to abusive men. On the contrary, most abusers go to great lengths to conceal their tendencies during the early stages of a relationship, knowing most women bolt if you show your  ugly side too early.