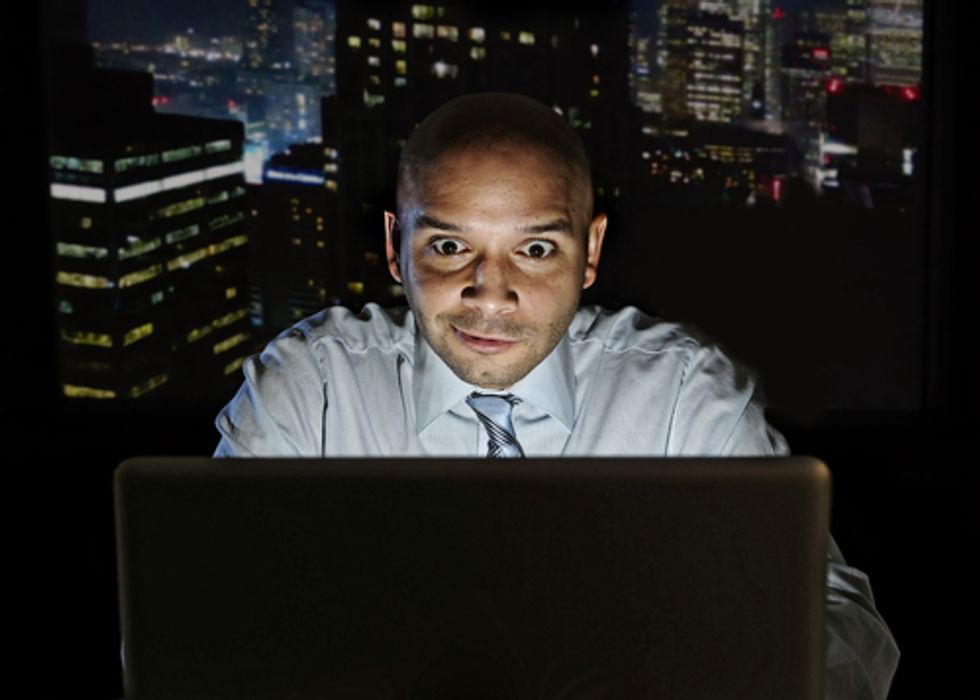 But what was really interesting in this is that Hedges, without meaning to, gave away the game with this: "There are few people on the left who grasp the immense danger of allowing pornography to replace intimacy, sex and love." With that, I realized that this was yet another person using the stance of concern about "debasing" women to cover for the true agenda, which is controlling women.

I've covered the Christian right and the anti-choice movement for years and years now. And while I firmly believe the movement is misogynist to its core, it's also critical to understand that they don't present that way. Instead, they present themselves as the protectors of women. The argument is that most sex is some kind of horrible debasement that men inflict upon women, and so, in order to protect women from debasement, sex has to be strictly regulated. Religious conservatives deny that they are anti-sex, saying that what they want is for sex to be about love. You know, for women's own good.

But, of course, what happens is that once you declare that sex must be for love or that it's illegitimate and debasing, you end up starting to regulate what loving sex looks like. And for "mysterious" reasons, somehow the things that get declared out-of-bounds due to their "debasing" nature are frequently the very things women need to enjoy sex. For instance, the Catholic Church argues that contraception makes sex cheap and debasing to women, and for sex to truly be loving, the couple has to be "open" to conception. Religious conservatives often make similar arguments about abortion, arguing that the availability of abortion allows men to debase women. That by forcing women to have babies, they will force men to marry them, which is supposed to somehow un-debase women. (How having someone reluctantly marry you is supposed to be dignified, I have no fucking clue.) This attempt to regulate sex to make it "loving" has also tended to mean, historically, policing actual behaviors in the bedroom, because a lot of the time, there's a sense that if sex is too hot or exciting, it can't be loving.  Again, no surprise that women are often the ones who are expected to give up a lot in order to keep sex from being "debased". Need a vibrator to get off? Too bad, because the sex police are quick to classify sex toys as "debasing". Indeed, I suspect one reason that a lot of women struggle to orgasm is because it's drilled into your head that sex is "about" love and affection and chasing your own orgasm is seen as petty and debasing behavior that distracts from the supposed true purpose of sex.

Yeah, so while it's complicated and there are a lot of sexual practices that are about debasing women and you are full well within your rights to be icked out if a guy presents them to you in bed, on the whole I've found that hand-wringing concerns about "debasing" women are usually little more than a cover story for the real agenda, which is trying to control women's sexuality through shaming and legislation. Sure, a lot of the arguments present themselves as attempts to control male sexuality, by arguing that men are pigs and need women to keep them on the straight and narrow. (Which is basically what Dines and Hedges are doing.) But this construction is just a feint, because inevitably the efforts to keep men from being pigs all focus on restricting and controlling women's sexuality, on the grounds that this is supposedly the only way to get men to act right. So, for instance, because men supposedly won't marry unless they have to, women's access to contraception is restricted to force men to marry. Funny how ostensible efforts to control men always end up being about controlling women, isn't it?

Not that controlling men is something we should want, either. It's just that most of the ostensible efforts to control male sexuality are feints to control female sexuality. For instance, the argument that men are only interested in fuck-and-run and need to be controlled in order to get them to commit is hoary bullshit that has no real evidence in the real world. It was clearly a myth created in order to excuse misogynist efforts to control women by pretending that it's about men.

You see how this plays out in Hedges's piece. While it's ostensibly a lament about how male sexuality is out of control and needs to be reined in, it's actually pegged to Fifty Shades of Grey, which is a movie aimed at a female audience. The claim that he wishes to control men to protect women is belied by the fact that most of the proposed solutions to the supposed problem are all centered around controlling women's choices. That's how these things always work. Men's desires are held out as the problem, but the solution somehow always manages to be centered around what women are supposed to do: Boycott Fifty Shades, lower our hemlines, read more Andrea Dworkin, whatever.

While I do think that there are some men who could benefit from rejiggering their expectations about what women are supposed to look and be like, I also think it's not good for women to back this message that we are so personally undesirable that the only way to get men to be interested in us is to coerce them by eliminating options. There's a reason that sexists love to push the message that women are the ones who want marriage and men are only frog-marched into it under duress. If the marriage is understood as the thing she wants and he doesn't, well, he gets to keep the upper hand while she has to do all the work to maintain the marriage. After all, she's supposedly the only one who has something to lose, right? This is just more of the same. Telling women that our male partners don't really want us but are secretly wishing that they could leave our beds to jerk off to porn is a way to keep women insecure, grasping, and afraid.

Memo to the President: Ignore congress

Senate Minority Leader Mitch McConnell (R-Ky.) has said that he and his Radical Republican minions will not vote to raise the nation's debt limit, threatening, perhaps, a credit default by the U.S. government.

This particular bit of Congressional kabuki has been a partisan shuttlecock in Congress for many years now, with Republicans posturing up to the last minute before the hapless Democrats cave and give the insurrectionists what they want—whatever it takes to keep the "full faith and credit" of the United States worth something.