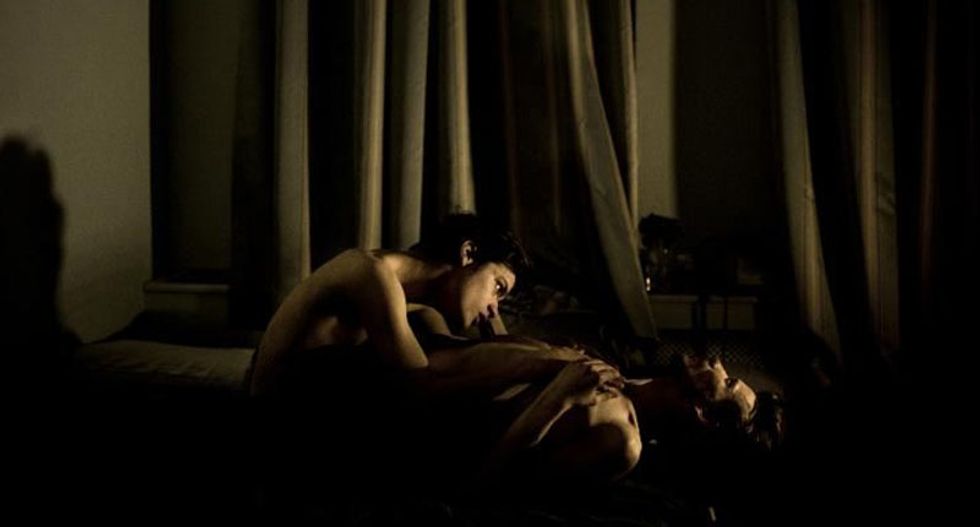 Danish photographer Mads Nissen was awarded the World Press Photo of the Year for this image of "Jon and Alex" locked in a tender embrace in St. Petersburg, Russia (AFP)

An image of a gay couple locked in a tender embrace in Russia won the prestigious World Press Photo award on Thursday, highlighting the plight of sexual minorities in the country.

But organisers said almost a quarter of all pictures reaching the penultimate round of the 58th edition of the contest were rejected because they were digitally enhanced.

Danish photographer Mads Nissen shot his evocative winning picture of "Jon and Alex" in a bare room in Saint Petersburg, with only a brown curtain as a backdrop.

One of the men is lying down with his eyes closed as the other looks down at him tenderly, their hands locked together on the one man's chest.

Russia's gay, lesbian, bisexual and transgender community has come under increasing attacks in Russia, with the government earlier this year passing a controversial law banning transvestites and transsexuals from driving.

In 2013, President Vladimir Putin signed a law banning the so-called "propaganda" of gay relationships to minors, despite an outcry from rights groups, Western governments and celebrities including Madonna.

Nissen's winning shot is part of his larger project called "Homophobia in Russia" and also won first prize in the Contemporary Issues category.

AFP photographer Kilic's first photo is of a young girl, wounded and dripping with water, who was found after clashes last year between riot police and protestors following the funeral of a 15-year-old boy who died from injuries sustained at earlier anti-government demonstrations.

Kilic's second picture captures the exact moment of an air strike against Islamic State (IS) fighters on a Syrian hilltop in October 2014.

Speaking about Nissen's winning photograph, jury chairwoman Michelle McNally said "it is a historic time for the image... the winning image needs to be aesthetic, to have impact and have the potential to become iconic".

"This photo is aesthetically powerful, and it has humanity," said McNally, who is The New York Times' director of photography and assistant managing editor.

Nissen, a staff photographer at Copenhagen's daily Politiken newspaper told AFP one of the reasons he thought he had won was that "gay rights have become an indicator" of how human rights are perceived in general.

"These two, Jon and Alex, are open and they are activists, and when they allowed me to shoot them they knew what they were doing."

"What they want most of all is for their cause to get acknowledgement and attention. They are willing to fight for it.

"They also belong to a new generation of activists who won?t bow their heads," said Nissen.

Kilic told AFP he was "very happy of course, it's the biggest photography contest of the world. It has been a dream for the last 10 years and it has finally happened."

But this year's contest was marred by the rejection of a high number of photographs because they were digitally enhanced, World Press Photo's managing director Lars Boering said.

"Our rules clearly state that the content of the image should not be altered. This year's jury was very disappointed to discover how careless some photographers had been in post-processing their files for the contest," Boering said in a statement.

Photographers digitally "cleaning up" images by removing small details or sometimes excessively toning pictures "compromised the integrity of the image".

"Consequently, the jury rejected 20 percent of those entries that reached the penultimate round of the contest and were therefore not considered for prizes," Boering said.

Controversy erupted over 2012 winner Paul Hansen's winning photograph from Gaza, where he used a certain post-production technique to edit his photograph.

This year's World Press Photo competition saw a jury of 17 professionals in the fields of photojournalism and documentary photography sift through 97,912 photographs submitted by 5,692 photographers of 131 nationalities.