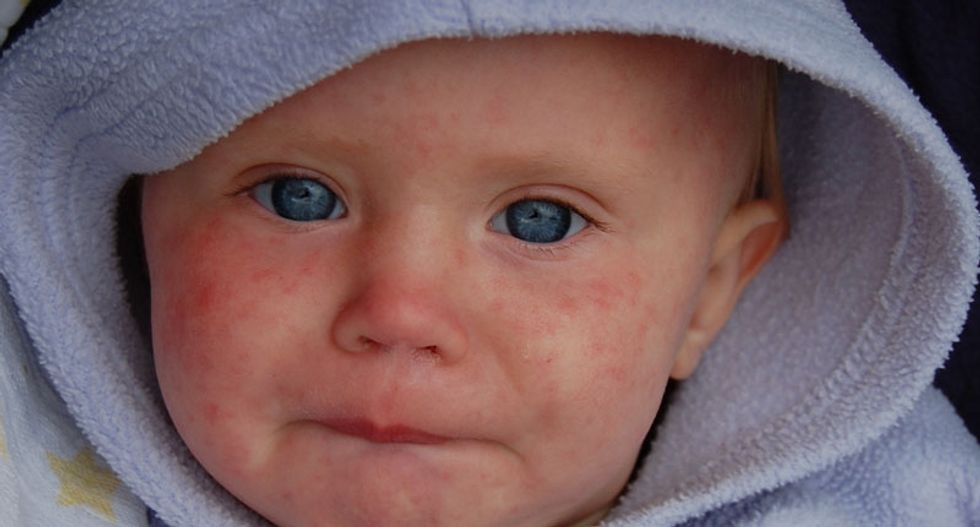 Three new cases of measles have been confirmed in Las Vegas, in people believed infected by a contagious worker at an upscale MGM Grand Hotel and Casino seafood restaurant, Nevada public health officials said on Friday.

None of those cases are believed linked to an outbreak of measles that began at Disneyland in December, she said.

All told, more than 150 people across the United Sates have recently been diagnosed with measles, 126 of them in California.

Nevada public health officials believe the Emeril's worker was infected by an infant who was too young to have been immunized against the highly contagious disease.

Sizemore said none of the newly diagnosed patients was hospitalized, but one visited a Walgreens drug store and Chili's restaurant in Las Vegas while infectious.

"The Health District is advising anyone who was at these locations during these times to review their immunization status against measles if they have not already had the disease," Nevada health officials said in a prepared statement.

"In addition, they should contact their health care provider if they develop rash with fever or other symptoms consistent with measles within 21 days after their visit," the statement said.

Authorities believe the Disneyland outbreak began when a contagious person from out of the country visited the Anaheim theme park in late December.

California health officials say the source may never be identified, despite a finding that the same strain of virus had led to a wave of illness in the Philippines.

The outbreak has renewed a debate over the so-called anti-vaccination movement, in which fears about potential side effects of vaccinations, fueled by now-debunked research suggesting a link to autism, have prompted a small minority of parents to refuse them for their children.

Measles was declared eliminated in the United States in 2000 after years of intensive childhood vaccine efforts. But in 2014 the country had its highest number of cases in two decades.

There is no specific treatment for measles and most people recover within several weeks. But in poor and malnourished children and people with reduced immunity, measles can cause serious complications including blindness, encephalitis, severe diarrhea, ear infection and pneumonia.