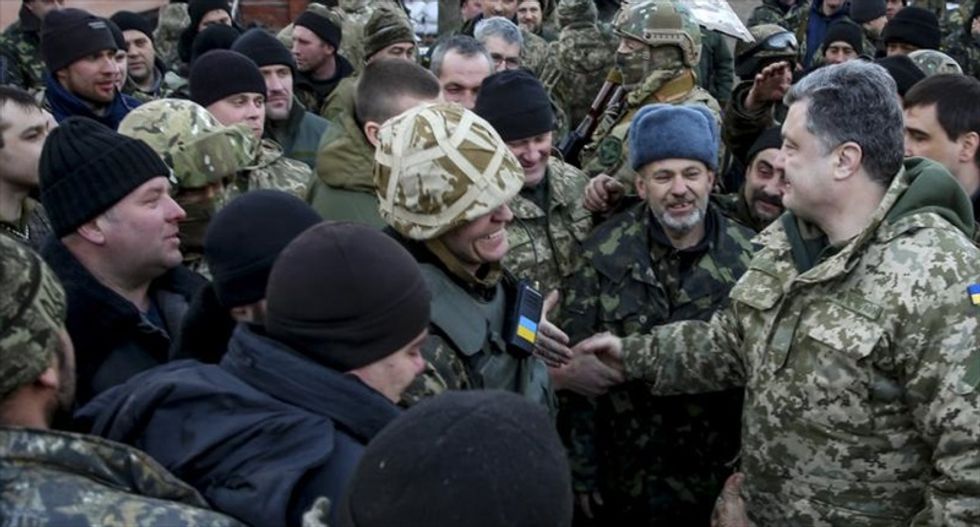 A handout photo taken and released by the Ukrainian presidential press service shows President Petro Poroshenko (R) shaking hands with servicemen, who left Debaltseve, during his visit to Artemivsk on Feb. 18, 2015. Image via Agence France-Presse.

"We see the best format would be a police mission from the European Union. We are sure this would be the most effective and best guarantee for security," Poroshenko said at the start of a meeting with security chiefs.

Poroshenko said that he hoped an official decision to invite the international contingent would be taken at the meeting.

"After the decision... we will start the official consultations which will help us achieve peace," Poroshenko said.

Poroshenko said he had raised the issue tentatively with the leaders of Germany, France and Russia at marathon talks in Minsk last week to hammer out a shaky ceasefire deal.

A ceasefire agreement sealed by that summit has failed to get off the ground as fighting with pro-Russian rebels raged on unabated around the flashpoint town of Debaltseve.

Some 2,500 Ukrainian soldiers on Wednesday retreated from Debaltseve in a bitter defeat for the government forces.

Ukraine and the US accused Russia of piling in weapons and troops to spearhead the assault on the strategic transport hub.