US jury orders Palestinians to pay $218 million over Jerusalem attacks 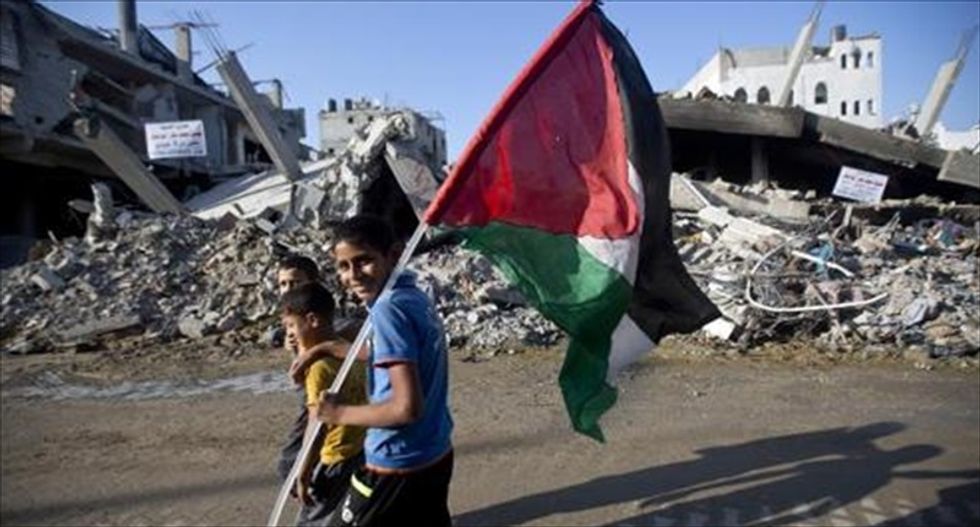 A group of Palestinian boys walk pasts destroyed houses in the Shejaiya neighborhood of Gaza City on Aug. 27, 2014 (AFP)

A US jury on Monday found Palestinian authorities liable for six attacks in Jerusalem that killed and injured Americans, awarding victims and their families more than $218 million in damages.

Under the US anti-terrorism act, the damages are automatically tripled, meaning that the Palestinian Authority (PA) and Palestine Liberation Organization (PLO) are liable to pay more than $650 million.

The jury reached its verdict following two half-days of deliberations, ending a landmark trial under US district judge George Daniels in New York that lasted more than five weeks.

The six attacks killed 33 people and wounded more than 390 others between January 2002 and January 2004.

The bombings and shootings were carried out by Hamas and the Al-Aqsa Martyrs Brigades -- blacklisted as terrorist organizations in the United States -- during the second Palestinian uprising againstIsrael.

The 12-member jury decided unanimously that the PA and PLO were liable on 25 separate counts connected to the six attacks.

They apportioned individual damages ranging from $1 million to $25 million to Americans who were injured or lost loved ones.

The total falls well short of the $1 billion sought by lawyers for 11 plaintiff families when the trial opened in mid-January.

"We're so impressed with how seriously the jury took their job, it's really amazing, very humbling."

It remains unclear if and how the Palestinian Authority can pay.

The Palestinian leadership is in serious financial difficulty because of revenue frozen by Israel.

Mahmoud Khalifa, Palestinian deputy information minister, expressed dismay at the verdict and vowed to appeal what he called "baseless" charges.

He said the case was politically motivated by "anti-peace factions" in Israel to block a two-state solution to the Israeli-Palestinian conflict.

"We are confident that we will prevail, as we have faith in the US legal system and are certain about our common sense belief and our strong legal standing," he said in a statement.

Israeli lawyer Nitsana Darshan-Leitner told reporters in New York that she would leave no stone unturned in forcing the Palestinians to pay.

"Now the Palestinian Authority knows there is a price for sending suicide bombers to our malls, to our cafes and blowing our buses up, and we will pursue and will make sure that the PA will pay every dollar," she said.

"We're going to take steps against their assets, they have assets in the United States, in Israel. We're going to go after bank accounts and money that they are getting paid on a monthly basis in Israel, for instance."

"There is no conclusive evidence that the senior leadership of the PA or PLO were involved in planning or approving specific acts of violence," lawyer Mark Rochon had argued in court last week.

Lawyers for the PA contended that the leadership should not be held responsible for "crazy and terrible" attacks carried out by people who acted independently.

He said the plaintiffs "exaggerated" testimony to make the Palestinian Authority "look bad" based in part on Israeli intelligence.

The Palestinians sought to argue that New York does not have jurisdiction to hear the case just because the PLO maintains a small office in the US.

The plaintiffs argued that the PA and PLO be held responsible for providing material support to the groups responsible for the attacks, blacklisted as a foreign terrorist organization in the United States.

The court also heard that members of the two groups were on the payroll of the two organizations.

The six attacks took place against Hebrew University, in Jaffa Road, King George Street, against the number 19 bus and in French Hills, a Jewish settlement in east Jerusalem.