US offers sympathy and support after Denmark terror attacks 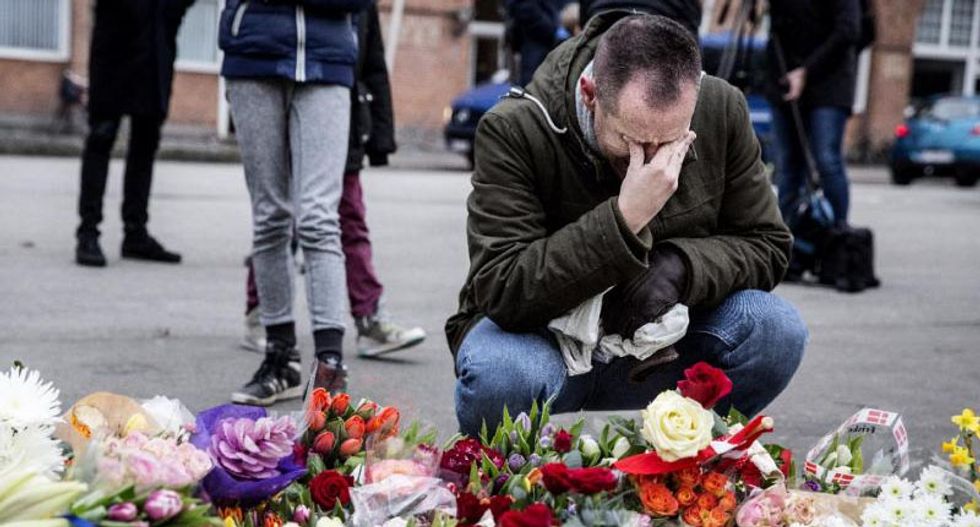 A man reacts next to flowers for the shooting victims outside the "Kruttoende" cultural centre in Copenhagen on February 15, 2015 (AFP Photo/Claus Bjorn Larsen)

The United States on Sunday condemned deadly attacks in Copenhagen this weekend, as it lashed out against all forms of bigotry, including anti-Semitism.

Officials said the suspected gunman behind the double shootings that killed two people at a cultural center and a synagogue before he was shot dead by police may have been inspired by last month's Paris attacks.

Washington "condemns the terrorist attacks that took place over the weekend in Copenhagen," State Department spokeswoman Jen Psaki said in a statement.

"Our deepest condolences go out to the family of the victims who were killed, and our thoughts are with the security officials injured in these terror attacks."

"The people of the United States stand united with the people of Denmark and all others who defend the universal right of freedom of speech and stand against anti-Semitism and bigotry in all its forms," Psaki added.

In a killing spree that bore a striking resemblance to the Paris attacks, the gunman first fired off a volley of bullets on Saturday at a cultural center where a panel discussion about Islam and free speech was taking place.

A 55-year-old man identified by the media was documentary film maker Finn Norgaard was killed at the event, which was also attended by Lars Vilks, a Swedish cartoonist behind a controversial caricature of the Prophet Mohammed, and the French ambassador.

In the second attack, the gunman opened fire outside the city's main synagogue while a bar mitzvah was being celebrated, killing a 37-year-old Jewish man named as Dan Uzan who was guarding the building.

Five police were also wounded in the attacks that stoked fear in the city of about one million people, one of the world's safest capitals.