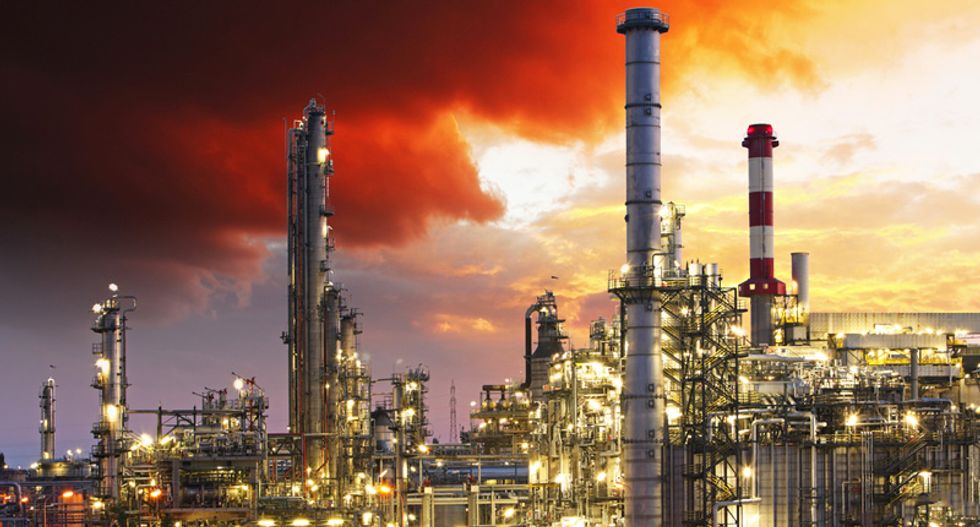 TOLEDO, Ohio (Reuters) - U.S. oil refinery managers are going to the mats, literally, during the biggest fight with union workers in 35 years, bedding down for a third strike week that experts and some employees say raises concerns over safety and operations.

At the 135,000 barrel-per-day refinery just outside of Toledo, Ohio, run by BP Plc and Husky Energy Inc , most of the nearly 300-person staff have been calling the refinery home since Feb. 9. For the last week, they have slept on recently purchased mattresses inside rental trailers to rapidly respond to any problems and avoid striking workers, sources say.

On Tuesday, a van full of washing and drying machines gingerly cut through about a dozen United Steelworkers carrying pickets and walking a strike line at the facility's front gate.

Those efforts underscore how far operators are willing to go to retain normalcy in the face of the largest national U.S. refinery strike since 1980. And as more replacement workers join the ranks here and the other eight refineries where strikes have occurred, more questions are arising about potential safety and production risks from an extended walkout.

While such warnings may seem a self-serving negotiating tactic, even some on the other side of the line are concerned. John Ostberg, a non-union control engineer who works in the main computerized control center at Toledo, quit his job on Monday weeks before he was scheduled to retire.

For months, Ostberg has been warning his bosses in emails about their plans to rely on replacement workers and supervisors if a strike occurred. He feared they were not properly trained, or too far removed from the frontlines, to respond to unit upsets and other problems that can escalate quickly without experienced intervention.

BP spokesman Scott Dean said the company does not discuss publicly discuss personnel issues, but did provide highlights of the refinery's safety record, such as how workers logged 15 million man hours, or 39 months, without a serious injury by June 2014. Husky Energy deferred all questions to BP.

In dozens of interviews with local USW workers, craftsman and experts, a portrait of the day-to-day role they play emerges: monitoring large electronic boards that detect problems, turning valves, checking the quality of refined products and overseeing work permits.

But their biggest contribution, the people say, is serving as the refinery’s frontline defense when things go wrong.

Chad Coburtson, president of the USW local at the Toledo refinery, described his members' role this way: "The steelworkers are like the nails in the frame. Without us the structure will crumble.”

At least three of the nine U.S. oil refineries targeted by a nationwide strike of USW members have reported upsets and unplanned repairs since their workers walked out on Feb 1. There is no indication of what caused the upsets, none of which resulted in any harm or serious damage to equipment.

BP Husky’s strategy will get its first real test this week when it attempts to restart its catalytic cracker, a major gasoline-producing unit that unexpectedly went down a few weeks ago. About 100 contract workers have been working around the clock to restart the unit on Wednesday, a source said.

“BP has trained multiple workers for every operations position normally performed by a striking USW employee. These replacement workers are comprised primarily of current and former BP employees who have been trained to the same legally required and BP-mandated standards as regular workers," BP spokesman Scott Dean said in an email.

Mark Broadbent, a research analyst with consultants Wood Mackenzie, said the longer the strikes last, the more exposed the refineries may be to disruptions caused by unit upsets.

"They are experienced. They know their facilities, what valves to turn. Their response time is much quicker, and they can easily resolve problems when units flare up,” he said. “The companies have certainly shown they are capable of running the refineries, but over time, as more upsets occur, they will likely not be handled as quickly.”

At Tesoro Corp's refinery in Martinez, California, managers and other non-union employees are sleeping in tents inside a centralized control room while they monitor the currently idle plant, according to striking workers at the site.

Criff Reyes, who has worked in the refinery's alkylation unit for 16 years, says he believes that Tesoro opted to shut down the plant - rather than restart it following maintenance - because managers are not qualified or experienced enough to run it after about 400 USW members walked out.

Tesoro spokeswoman Tina Barbee said the employees at the refinery are the "same ones who provide technical support to the facilities, supervise the operators on a daily basis and train them in how to safely operate the refineries."

Currently, there are 320 workers at Toledo refinery represented by the USW and about 278 non-union employees, according to BP.

At any given time, there are also anywhere from 300 to 1,000 contract workers at the refinery. During most days, USW workers are outnumbered by contractors by 3-to-1, building trade and union sources said. The USW used to have members in a boiler and carpenter shop, but now that work has gone to contract workers.

Typically, USW workers are responsible for shutting down a unit, while contractors do the work. But there are a host of jobs at the refinery that do not fall neatly in the project category done by contractors work and operations done by USW.

This type of work is described as routine maintenance - replacing wires, screens and other tasks - and it is at the heart of the disagreement between the USW and the companies. USW says these jobs are routine tasks closely aligned to operations while the companies want to retain the flexibility that comes with contract workers - sometimes represented by their own unions - and limit their exposure to USW strikes.

The issue has divided traditional allies.

"On one hand, we are union brothers and sisters and we support them," said one local leader in the building trades. "On the other hand, they want our jobs, so it's not like we can picket with them."

Inspectors have visited refineries in Carson, California, and Catlettsburg, Kentucky, where strikes have occurred to determine whether the replacement workers have the proper training and qualifications. In Kentucky, inspectors from the state's Department of Labor were responding to a complaint, while California inspectors from the state's Department of Industrial Relations were already at the site for a routine visit and decided to expand their inquiry.

Ostberg, the 56-year-old engineer who worked at Toledo since 1980, helped run the refinery operating center, known locally as the ROC, the heart of the plant. Behind a blast-proof wall, Ostberg and others monitor the dozens of units that populate the refinery to ensure things are running properly and alert USW workers manning the units when they are not.

Toledo is an integrated system, which means each unit depends on another for feedstock. So, if there is a problem with one unit, it can quickly grow to other units and often takes more manpower to put under control.

“I sit behind a blast-proof wall, so I’m not worried about my safety," he says. "But I fear for everyone else.”