Utah GOP representative Mia Love: 'We are the ones that care about the poor' 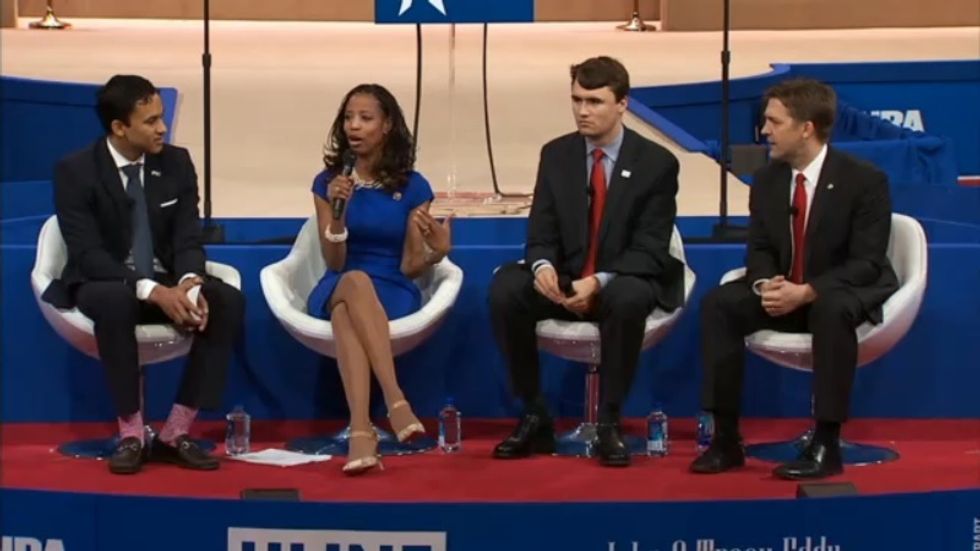 The annual confab of the Conservative Political Action Conference (CPAC) started off its 2015 festivities Thursday morning with a nod to diversity, featuring a couple of the GOP's African-American stars as it began its three-day presentation of conservative speakers.

Probable presidential candidate and former neurosurgeon Dr. Ben Carson started things off by suggesting that conservatives should try to kill the IRS, which roused the crowd. But otherwise, Carson seemed to be going through the motions, ticking off the usual conservative talking points -- school choice, limited government, killing Obamacare, and fighting "radical Islam."

Carson, who is known for his over-the-top comparisons and accusations, was surprisingly composed here. His speech came off as so many trite one-liners and empty platitudes. Which is ironic, considering what the next speaker, Utah's Senator Mike Lee, had to say.

Lee has been labeled the most extreme of the Senate's GOP wingnuts, but he was surprisingly disciplined and, well, dull, as he laid out a hypothetical case for who might make the ideal conservative presidential candidate for 2016.

And he did so by listing the things CPAC-goers should not want in candidate.

"When conservatives elevate unserious presidential candidates, candidates who are not principled, positive, and proven, it's not the media's fault. It's not the establishment's fault. It's our fault, and we can't let that happen."

That line got a very tepid response from an audience that yells out hosannas at the least provocation. But then Lee went even farther...

"Imagine for a moment the impression this audience could leave a candidate if each of you refused to give a standing ovation to every trite one-liner, every empty platitude, or every hollow political slogan that you hear over the next day and a half -- and yeah you will hear some of those."

Well, ouch. This audience might as well go home, right? If they are being told not to cheer on hollow political slogans, what the hell else are they going to do?

Anyway, Lee was followed by a panel of "millennials" to give the GOP some hope that it won't soon become irrelevant because of inexorable demographic changes.

And this was the opportunity for Mia Love, the young, African-American representative from Utah, who is a Mormon, to shine. She's quite good as a speaker, and she defies many of the stereotypes about both black Americans and Republicans, but it's hard to see her inspiring a mass shift of black voters to her side.

But she does try. Repeatedly, she tries to convince listeners that government efforts to help out minority Americans are actually victimizing them, and that the conservative vision of limited government is the best way to "free" the poor.

"We are the ones that care about the poor," she said. "The Left does the opposite and brings everyone down to the lowest common denominator."

The CPAC audience ate that up, and by this time they'd no doubt shaken off Mike Lee's instructions: They can applaud whatever bullshit gets tossed their way, thank goodness.

VIDEO: Watch this segment of Mike Lee bumming out the CPAC crowd...