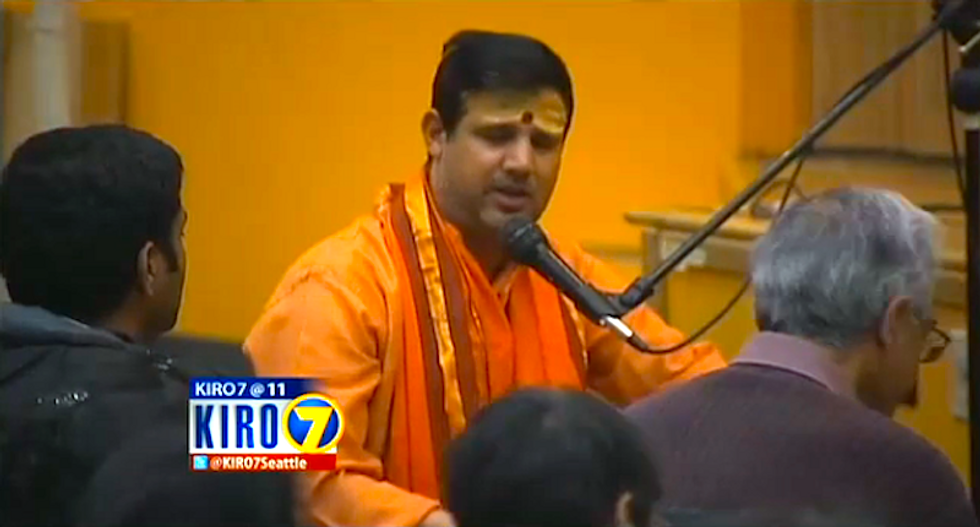 Vandals spray-painted a swastika on a Hindu temple in Washington state and warned worshipers to “get out.”

No suspects have been identified in the case, but the Snohomish County Sheriff's Office said swastikas and warnings for Muslims to "go home" were found Sunday morning painted on Skyview Junior High School, about three blocks away.

Red paint was used in each incident, deputies said.

The swastika is a sacred and auspicious ancient symbol in Hinduism, but it has gained a new hateful meaning after it was appropriated by Nazi Germany.

“It's possible that one of them mistook it to be the swastika -- to be a Nazi symbol -- it's possible, but I don't know why someone would write it here," said Sriram Subramaian, who worships at the Bothell Hindu Temple and Cultural Center.

Vandals targeted the temple several months ago, although no specific message was left behind.

“The people who did it, they have no idea what we stand for,” said Nit Niranjan, chairman of the temple's board of trustees. “We have a very straightforward religion that stands for love and respect.”

Muslim headstones were destroyed at a nearby Islamic cemetery in November, although investigators said they hadn’t found enough evidence to prove it was a hate crime.

The county executive said the vandalism does not reflect community values.

The graffiti has been removed from the Hindu temple, but worshipers fear it could signal violence against them.

“I was paranoid, to say the truth, this just doesn’t look right to me,” said worshiper Jay Araman.