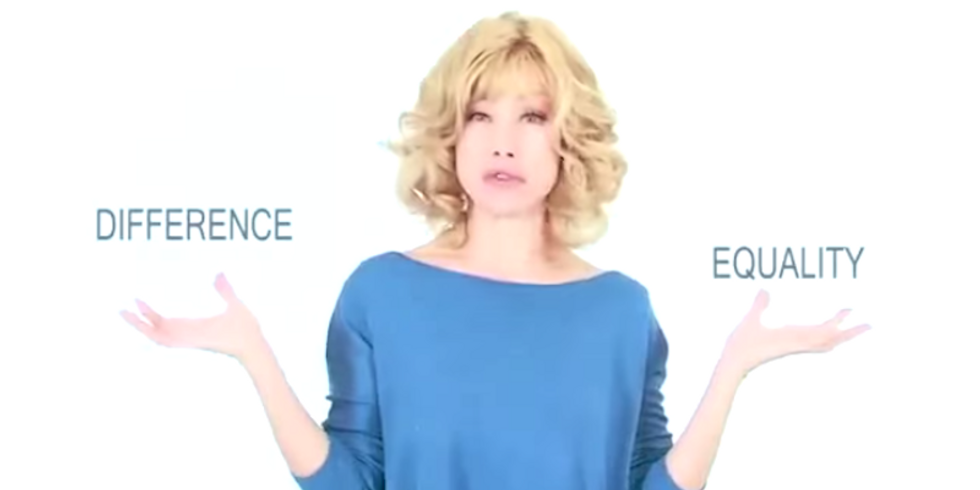 Nothing shatters the image of an out of touch, sexist Catholic Church like an all-male summit on women. So, in a great P.R. move, the Vatican is hosting a Plenary Assembly entitled, "Women's cultures: equality and difference," from February fourth to February seventh. (Then again, given that the Vatican did appoint someone with Hitler Youth experience to be god's messenger on earth, this is a relatively minor misstep.)

But even given the insular, boys-only nature of the Assembly, as well as the Vatican in general, the video released to publicize the event is shockingly bizarre, embarrassing and cringe-inducing.

Incorporating cheesy wipes, and interesting fonts, the video stars Italian actress Nancy Brilli, who does some dramatic head moves appropriate for a Pantene commercial and says things like, "I'm sure you've asked yourself, who you are, who you do, what you think about your being a woman. Your strengths. Your diffIculties. Your body. And your spiritual life." She then encourages women to put their work online with the hashtag, or, as Brilli says, "ashtag," #LifeOfWomen. She signs off by saying, "You-- [shampoo ad head move]--Yes you--are important!"

The Italian version of the video was a hit in Italy but the English-language one came under so much criticism, the Vatican removed it. Conservatives found it too radical. It must be because it features a woman. Other people found it sexist. Phyllis Zagano, wrote in the National Catholic Reporter,

You can't make this up.... The Vatican's Pontifical Council for Culture has posted a two-minute video of a sexy blonde woman inviting other women to crowdsource another video for its February meeting.... Aside from the obvious - sexy sell has long gone by the boards in developed nations and is totally unacceptable in predominantly Muslim countries - the fact of the matter is that highlighting a stereotypical spokeswoman is not the way to ask for women's input.

People also took to twitter to denounce the video:

It's ironic that Brilli, who has very obviously had plastic surgery and whose partner is a plastic surgeon, would be chosen to help spread the word about an assembly which condemns the very procedure. According to the outline document released by the Vatican:

“Plastic surgery is like a burqa made of flesh.” One woman gave us this harsh and incisive description. Having been given freedom of choice for all, are we not under a new cultural yoke of a singular feminine model? What do we think of women used in advertising and in the mass media?

Burqa made of flesh? Ouch! (And I mean that in both senses of the word)

Brilli took the chance to speak out against the criticism of plastic surgery at a press conference on Monday which was intended to highlight this week's assembly:

Defining this surgery as 'the new burqa' rests on the fact that women often seek to conform to one model to be accepted... If a woman changes the features she was born with but is not comfortable with, however, I do not understand why she should be demonized and criticized.... As long as the point is to become what you want and not to follow a standard imposed from outside....If she feels better, where's the harm?

That wasn't the only damage control done at the press conference. Cardinal Gianfranco Ravasi, head of the Pontifical Council for Culture and promoter of the Assembly, was able to spin the video fail as a teachable moment:

It allowed us to understand ... how we must represent not just the traditional sensibilities of Europe but also that of other cultures and other horizons... It allowed me to realize that the sensibilities were profoundly different.

We will have to see how the actual Assembly goes. Rest assured, nothing too radical is going to go on. Brilli explained, "It's not that women want to be cardinals, but they want to take part in this totally new opening of the church, which I think might be there -- and that I did not expect." Phew!