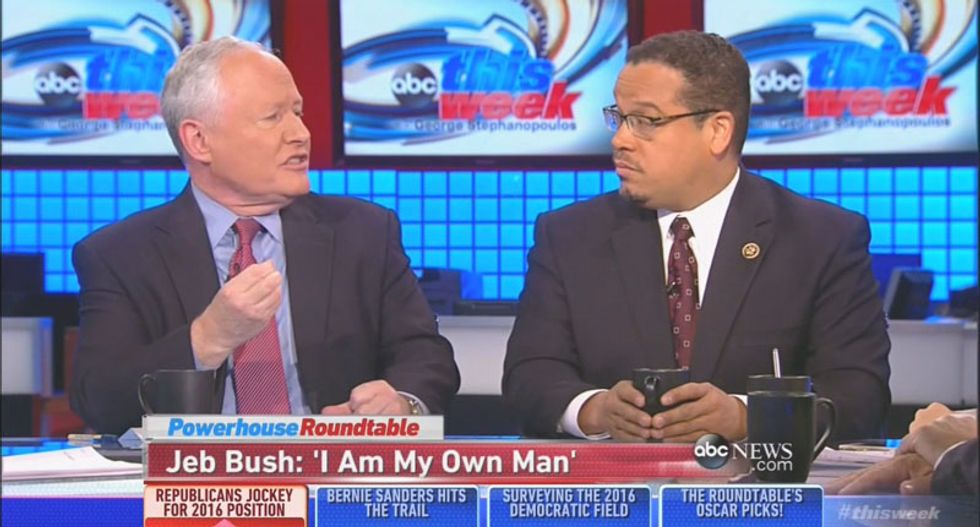 During a panel discussion on ABC’s This Week, commentator Bill Kristol defended the legacy of former President George W. Bush by attempting to explain to a U.S. congressman that the Iraq Bush invaded in 2003 was "safe and peaceful" when he left office in 2008.

Kristol was asked by host George Stephanopoulos to address the foreign policy "roll-out" of Bush brother Jeb Bush last week, with the former Florida governor asserting "I am my own man," as he attempted to put distance between himself and his brother's disastrous two terms.

After admitting that Jeb Bush is doing well with donors, but not so well with voters, Kristol said, "They did a great job of rolling him out and making him seem inevitable, but I don't think he feels as inevitable as they hoped he would at this point."

Congressman Keith Ellison (D-MN) was quick to point out that the Bush name carries the baggage of the Iraq war which the congressman called, "a complete debacle."

As Kristol smiled and shook his head, Ellison explained, "I mean, we cannot forget that we are in the space we are in now because of that invasion that was based on falsehoods in every conceivable way, and the tremendous loss of money, treasure, and blood. And, of course, he [Jeb Bush] wants to escape that legacy."

Ellison went to say, "I think we cannot escape how much damage the Iraq policy of George W. Bush did to his country and..." before Kristol cut him off.

"When George W. Bush left office, Iraq was safe and peaceful," Kristol lectured Ellison. "Thanks to the surge.." at which point Ellison cut Kristol off, shaking his head and saying, "Nah, nah. There was always rumblings and dangers in that place."