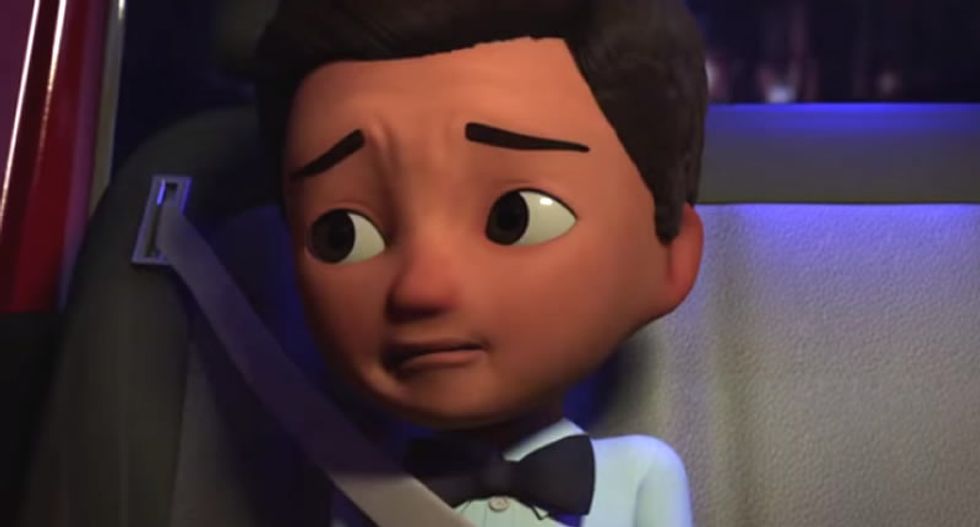 An animated video produced by the Jehovah's Witnesses informs children that if they don't pay attention at church, they do so at their own peril.

In the video, two children are attending a church meeting with their parents. As a preacher drones on unintelligibly in the background, the girl is reprimanded for nearly falling asleep, while the boy is punished for attempting to play with his car.

When the family arrives back home, they sit down at the dinner table. The mother asks what the pair learned at church today, and the girl replies, "no sleeping at the meeting," while the boy offers, "no playing at the meeting."

The father then asks the children to imagine "what would have happened if nobody listened to Jehovah when he explained to Noah how to build the Ark."

The ad then shows Noah and his children playing on handheld gaming devices, chasing butterflies, talking, and sleeping while, presumably, God is explaining how to build the Ark. As the sky darkens, they all run into a shoddily designed rectangular building that falls apart when the first drop of rain hits it.

The screen then fills with water, and the handheld device that Noah was playing earlier floats by with the words "GAME OVER" on it.

"That's not what happened, Dad," the son says.

"That's right -- Noah paid attention, and it saved his life. Paying attention at the meetings can help save your life, too."

The video then cuts back to the family at the church meeting, and both children are diligently taking notes while the preacher -- whose voice is now crystal clear -- explains how God taught Noah how to build the Ark.

Watch the entire video via JW.org on YouTube below.