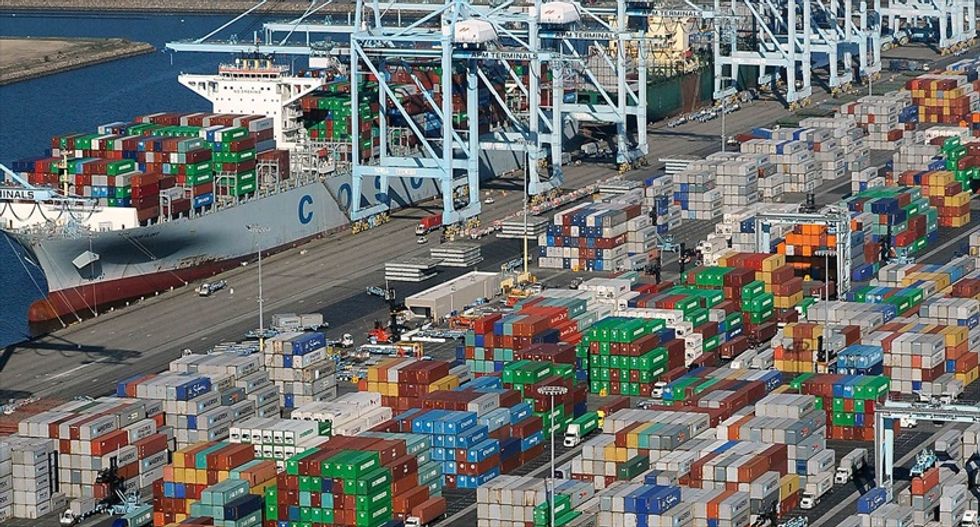 Shipping containers sit idle at the ports of Los Angeles and Long Beach, California in this aerial file photo taken on Feb. 6, 2015. Photo by Bob Riha, Jr. for Reuters.

A partial shutdown of 29 U.S. West Coast ports stretched into a third day on Monday ahead of the U.S. labor secretary's scheduled arrival in San Francisco to try to broker a settlement ending months of disruptions on the cargo-clogged docks.

President Barack Obama, under pressure to weigh in on a labor dispute that has rippled through the U.S. commercial supply chain and beyond, said on Saturday he would dispatch Labor Secretary Tom Perez to meet with the two sides in the conflict.

A spokeswoman said the labor secretary was due to arrive in San Francisco on Tuesday to join in talks between the shipping companies and the union representing 20,000 dockworkers.

The secretary's spokeswoman, Xochitl Hinojosa, declined to detail his itinerary or his meetings schedule. The White House said last week that Perez had already been in contact with the parties and would keep Obama informed.

The International Longshore and Warehouse Union and the shipping companies' bargaining agent, the Pacific Maritime Association, have said nothing about the status of the talks since they agreed on Friday to honor a news blackout requested by a federal mediator.

The PMA previously said the talks, which have dragged on for nine months, hit a new snag over a union demand for changes in the system of binding arbitration of contract disputes. The union has insisted the two sides are near an accord.

Inbound cargo vessels continued to stack up at anchor, with 34 freighters idled on Monday morning waiting for a berth outside the ports of Los Angeles and Long Beach, the nation's two busiest cargo hubs.

Loading and unloading of cargo vessels at all 29 West Coast ports have been halted since Friday night and were not set to resume until Tuesday morning. Vessel operations were likewise suspended last weekend, and again on Thursday.

But the ports were not left entirely dormant. The companies said work had continued in the dockyards, rail yards and terminal gates as they seek to clear some of the backlogged cargo containers stacked up on the waterfronts.

The affected ports handle nearly half of all U.S. maritime trade and more than 70 percent of imports from Asia. A domino effect has rippled across much of the U.S. economic landscape, affecting agriculture, manufacturing, retail and transportation.

California farmers have been especially hard hit, with port disruptions posing a major barrier to perishable goods headed to overseas markets and export losses estimated to be running at hundreds of millions of dollars a day.

Asian exporters faced rising shipping rates and some have been forced to reroute their goods by more costly air freight. One automaker, Japan's Honda Motor Co <7267.T>, said on Sunday it would slow production for a week at plants in Ohio, Indiana and the Canadian province of Ontario, because of port-related delays in parts shipments to those factories [ID:nL5N0VQ07H].

The shippers have said they were curtailing port operations because they were no longer willing to pay union workers premium overnight, holiday and weekend wages during work slowdowns the companies have accused the union of orchestrating.

The union has faulted changes in shipping practices instituted by the carriers themselves for causing worsening backlogs. Union officials also say the shippers are engaging in brinkmanship, using the partial shutdown to exaggerate the magnitude of the crisis as a pressure tactic.

The last time contract talks led to a full shutdown of the West Coast ports was in 2002, when the companies imposed a lockout that was lifted 10 days later under a court order sought by President George W. Bush.

The shipping industry has estimated the 2002 lockout caused $15.6 billion in economic losses. The retail and manufacturing industries have projected that a full, extended shutdown of the ports now could cost the U.S. economy some $2 billion a day.