44 US lawmakers introduce resolution to condemn the Armenian genocide 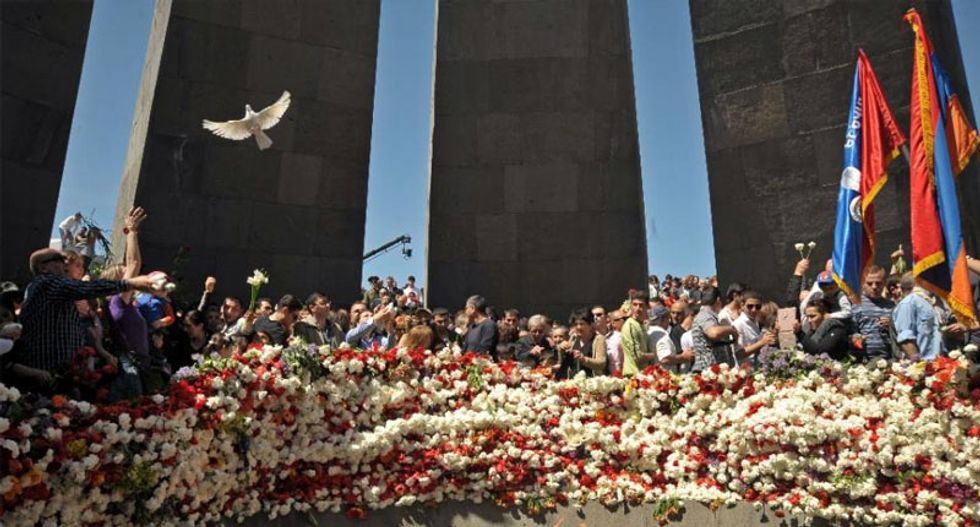 People lay flowers at the monument to Armenians killed by Ottoman Turks during World War I in Yerevan, on April 24, 2014, to mark the 99th anniversary of the Armenian genocide (AFP Photo/Karen Minasyan)

US lawmakers introduced a resolution Wednesday urging President Barack Obama to recognize mass killings of Armenians under the Ottoman Empire as "genocide," a move sure to anger Turkey ahead of the tragedy's 100th anniversary.

The bipartisan Armenian Genocide Truth and Justice resolution was sponsored by 44 members of the House of Representatives.

It would urge Obama to help stabilize and improve Armenian-Turkish ties "based upon the Republic of Turkey's full acknowledgment of the facts and ongoing consequences of the Armenian Genocide, and a fair, just, and comprehensive international resolution of this crime against humanity."

Armenia says an estimated 1.5 million people were killed by Ottoman forces in 1915 in what it calls a genocide.

Modern Turkey has always rejected the term, putting the toll at 500,000 and blaming their deaths on war and starvation.

President Obama has not used the word "genocide" to describe the tragedy, but congressman Brad Sherman noted that Obama did so as a senator, as did John Kerry, the current secretary of state.

"It is time for both the executive branch and the legislative branch to do the same," Sherman said.

House Democrat Adam Schiff, a lead sponsor of the bill, said it was "indisputable" that Armenians "were deliberately murdered in the first genocide of the 20th Century."

He said Washington must send a message it will not tolerate "any country that hides behind bully tactics to shroud violations of human rights."

House Democrat Jackie Speier, who is Armenian-American, described to reporters how Armenians were "death-marched" from their villages in large numbers.

"It's history now, but it's time for us to recognize it once and for all," Speier said.

Over the years the slaughter has been recognized in the United States in various ways.

President Ronald Reagan branded it a genocide in a 1981 proclamation, and more than 40 individual US states have taken similar action.

The House Foreign Affairs Committee recognized the Armenian "genocide" in 2010, triggering fury in Turkey, a key majority-Muslim ally of Washington.

House Speaker John Boehner has not indicated whether he will bring the latest measure to the floor, and the White House declined to comment on it.

Around 20 nations, including France and Russia, recognize the killings as genocide.