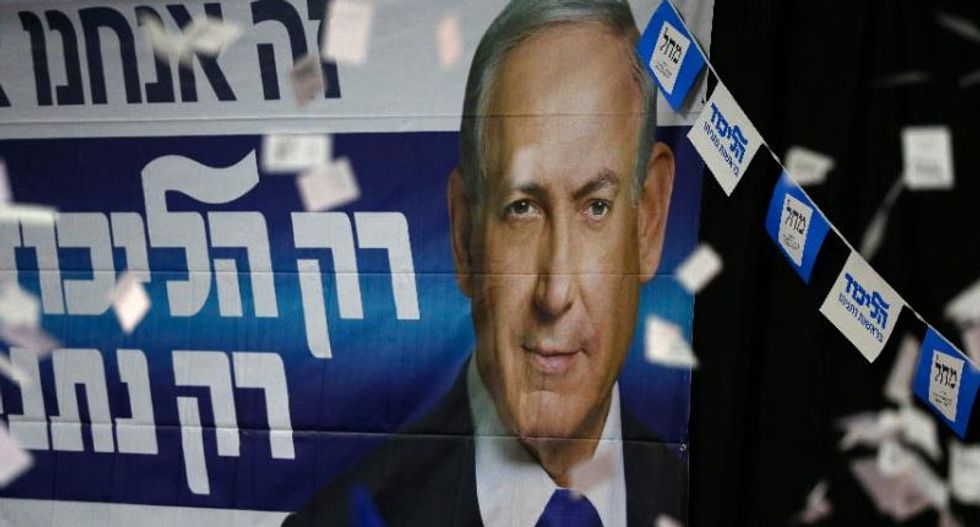 Confetti falls in front of a poster of Israeli PM Netanyahu as supporters of his Likud party take part in early celebrations while they wait for the announcement of the first official results of elections on March 17, 2015 in Tel Aviv (AFP Photo/Jack Guez)

Republicans were the first US politicians to publicly congratulate Benjamin Netanyahu on Wednesday for winning Israel's closely-watched elections, weeks after the prime minister controversially addressed Congress at their invitation.

"Congratulations to Prime Minister Netanyahu on his re-election. He's a true leader who will continue to keep Israel strong and secure," Jeb Bush, a Republican prospective frontrunner in the 2016 presidential race, said on Twitter.

"The oldest and most stable democracy in the Middle East has once again gone through a hotly-contested election and will peacefully form a new government," he said.

Even with results still up in the air late Tuesday, some Republicans were quick to declare success for the savvy Israeli politician known to many as "Bibi."

"Congrats to Netanyahu on victory in Israeli elections. A true leader in a wilderness of turmoil," congressman Jeff Duncan wrote on Twitter, barely 90 minutes after polls closed in the Jewish state.

While Tea Party favorite Senator Ted Cruz late Tuesday applauded a Netanyahu victory and assured that Americans "are proud to stand steadfastly with our Israeli brothers," he slammed President Barack Obama for his tense ties with Netanyahu and opposing his recent visit to Washington.

"His electoral success is all the more impressive given the powerful forces that tried to undermine him, including, sadly, the full weight of the Obama political team," Cruz wrote.

Republicans control both chambers of Congress. Earlier this year, House Speaker John Boehner caused a political uproar when, without consulting the White House, he invited Netanyahu to address a joint meeting of Congress.

Most Democrats used discretion in the early hours of Wednesday, and in the run up to the poll, they largely held their verbal fire, opting instead to point to the historic and cultural US-Israeli ties.