Abortion isn't a life-altering decision. But childbirth is. 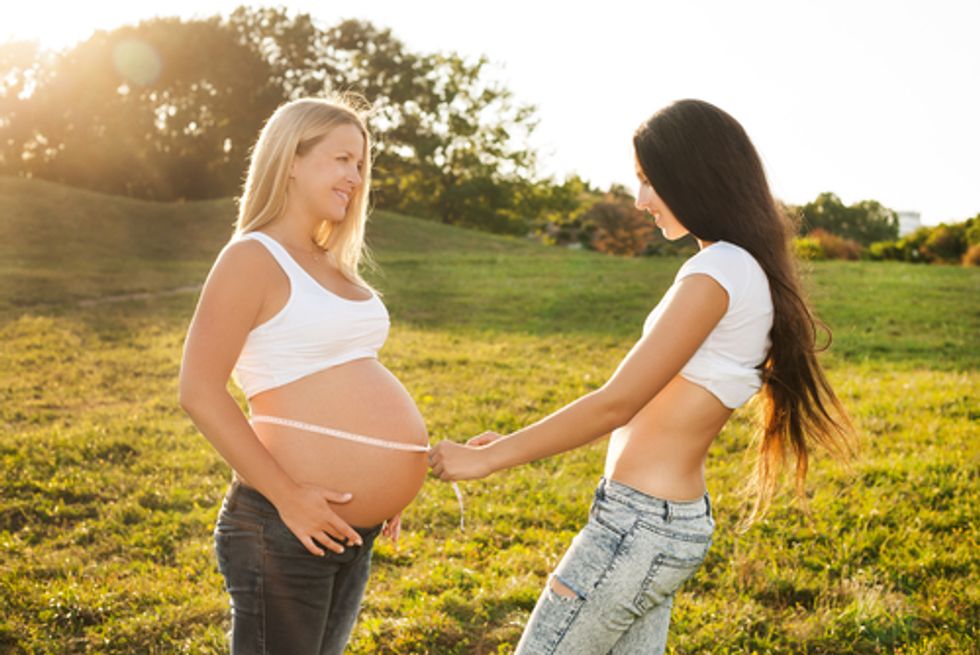 Let's be honest here: Who's life is about to change in a dramatic, unalterable way here?

Olga Khazan at the Atlantic has a piece examining this new law, just signed by the governor of Arizona, requiring doctors to lie to abortion patients and tell them that there's such a thing as an abortion "reversal". Khazan does a good piece debunking this bullshit---long story short, no, you cannot reverse an abortion---but for some reason, she doesn't really question the other bullshit premise of this law, which is that there's any demand for abortion reversals. Which is a shame, because that might be an even bigger lie than telling women they can "save" a pregnancy by shooting up with a bunch of hormones.

In fact, I would argue that the primary purpose of this law is to bolster the illusion that women frequently experience "abortion regret"---even moments after getting an abortion!---and that therefore abortion clinics need to be shut down to protect women from themselves. This law is about promoting a misogynist stereotype that women are mentally and morally children, prone to acting on whims and then later regretting their silly child behavior. The argument is that abortion clinics prey on women, a gender anti-choicers believe to be inherently dumb and fickle, by luring them in with false promise and probably candy. And only after the abortion do women realize they have been victims! And they regret listening to that big abortion man with his chocolates and promises of shopping sprees at Claire's. It's a super duper condescending image of women, and this assertion that women frequently regret abortion within minutes of taking an abortion pill needs to be denounced, with loud demands for evidence of this nonsense.

Khazan, however, isn't sure if she buys the women are fickle stereotype or not. On one  hand, she writes, "An abortion is a difficult, life-changing decision, and it's not one most women take lightly." But then she immediately follows it up with, "Giving women hope that a medically untested procedure can save their unborn babies doesn't make that choice any easier."

It's a super weird sentence. Why on earth would we believe than anyone who is about to take an abortion pill is interested in "hope" that her pregnancy can be saved? That is nonsensical. But I think Khazan has bought into some of the sexist propaganda on sale here, not just with the "unborn babies" nonsense---they are embryos, don't give that ground---but on the idea that abortion isn't just a difficult decision---for some, sure, okay, but not as many as she implies---but that it's "life-changing".

Time for some bluntness, yet again: Abortion isn't life-changing. Giving birth, now that's a life-changing decision. Indeed, the primary reason, above all other reasons, women get abortions is so their lives don't change. In some cases, it's because they like the status quo situation and don't want to change that. In other cases, they may not love their lives as they are, but they know that adding a baby will make things worse. Whether it's difficult or easy, no biggie or morally wrenching, one thing that nearly all abortion patients have in common is they are trying to avoid changing their life dramatically by having this baby. (There are a few other cases, small in number, where medical necessity comes into play, but even that, arguably, is about preserving the health status quo.)

This bizarre inversion of reality, where abortion is somehow treated as a graver life change than childbirth, is what they're trying to sell you with this stupid "abortion reversal" thing. They're trying to promote the idea that not having a baby right now is an unalterable decision that will stick with you the rest of your life, one in which there is no take-backsies. But in reality, it's the other way around. Having a baby is an unalterable decision that will be with you for the rest of your life, so that's the decision you really need to give time and thought to before committing.

Having an abortion is just maintaining the status quo. Should you decide, at some point in the future, that you've changed your mind and would like a baby now, just stop using contraception and get on that. Odds are highly in your favor. More so because you have proof that you can get pregnant, so you don't even have to suffer that fear some people have that they're infertile and don't know it.

Honestly, I swear to god I think anti-choicers are just projecting the things that are actually scary about childbirth and claiming that no, they're really about abortion. Let's not fall for that propaganda, folks.