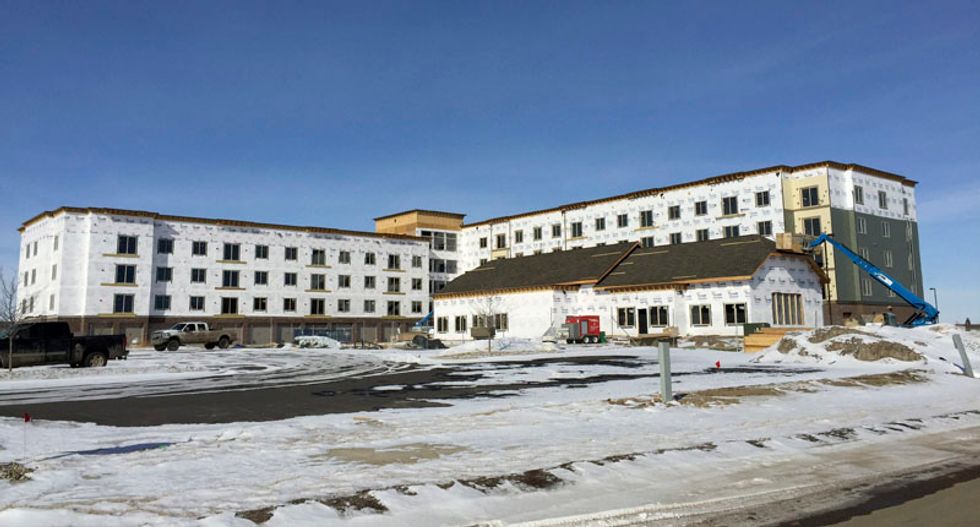 Construction continues on an apartment building in Williston, North Dakota, set to contain a swimming pool and other amenities February 27, 2015. REUTERS/Ernest Scheyder

WILLISTON, N.D. (Reuters) - It is getting cheaper to rent an apartment in North Dakota's oil patch.

Prices, which only last year rivaled levels in New York City and Geneva, have slipped about 15 to 20 percent in the past two months as dozens of new apartment buildings opened in Williston, Watford City and other oil hub cities.

Growth in demand has slipped because the plunge in crude oil prices has led to cuts in capital spending by energy producers.

There are still about 1,800 energy-related jobs unfilled in the No. 2 U.S. oil-producing state, and there is still demand for apartments. But the accommodation shortage is nothing like it was when the state's oil boom began six years ago. As new developments start leasing, tenants are able to negotiate lower rents.

"You're starting to see prices fall this year as more units come online," said Terry Metzler of Granite Peak Development, which has built apartments and a shopping center in Williston, considered capital of the state's oil boom, and has an additional 480 apartments and houses under construction.

When the state's oil boom began in 2009, prospective tenants swapped stories of sleeping in cars overnight because there wasn't enough housing. The dozens of new properties opening in the past two years and at least 20 more opening in 2015 have helped put an end to that.

Property managers, who only a few months ago could heavily scrutinize potential tenants and reject anyone whose credit or behavior was in doubt, are now so eager for move-ins they're all-but volunteering to carry boxes.

Many developers say they are confident the state's oil patch will not go belly up like it did during two previous busts in the 1980s and 1950s. Stropiq LLC, for instance, is seeking zoning board approval for a $500 million development just outside Williston that will include retail and office space, as well as 900 apartments and townhomes.

These and other projects are moving forward despite recent job cuts by Halliburton Co and others that have cooled economic growth and led state officials to predict a drop in oil tax revenue this year.

Property managers say that, for now, they still have no problem filling spots as they become available, especially since prices are falling. Occupancy data are not aggregated across the region, but checks with individual properties showed most are 92 percent to 95 percent full.

At Williston's Dakota Ridge, a luxury complex of three-story buildings owned by private equity firm Granite Peak Partners Inc (not affiliated with Metzler's group), a two-bedroom apartment rented for $3,200 per month in early 2014.

A year later, even with recent recently added perks like a 10-person hot tub and free alcohol and snacks in the common lounge, the same apartment goes for $2,600.

"I could see the quality of life improving for some people if they're not worried each month about how they're going to make rent," said Justin Hammer of IRET, which owns apartment complexes in Williston and Minot, some of which it has begun pricing below market rates to appeal to families and retirees.

Community leaders have reacted to the apartment price drop with barely concealed glee, describing it as a sign the region is not just a bedroom community for roustabouts anymore.

"You can't build a vibrant community with services, quality of life and families when you have some of the highest rents and costs in the nation," said Shawn Wenko, Williston's director of economic development.

In Dickinson, home to the regional office of the state's largest oil producer, Whiting Petroleum Corp, the price of a two-bedroom apartment at Sterling Group's Sierra Ridge was cut last week to $1,775 from $2,159.

"We still, even with all we're building, don't have enough housing in this region," said Metzler of Granite Peak Development.