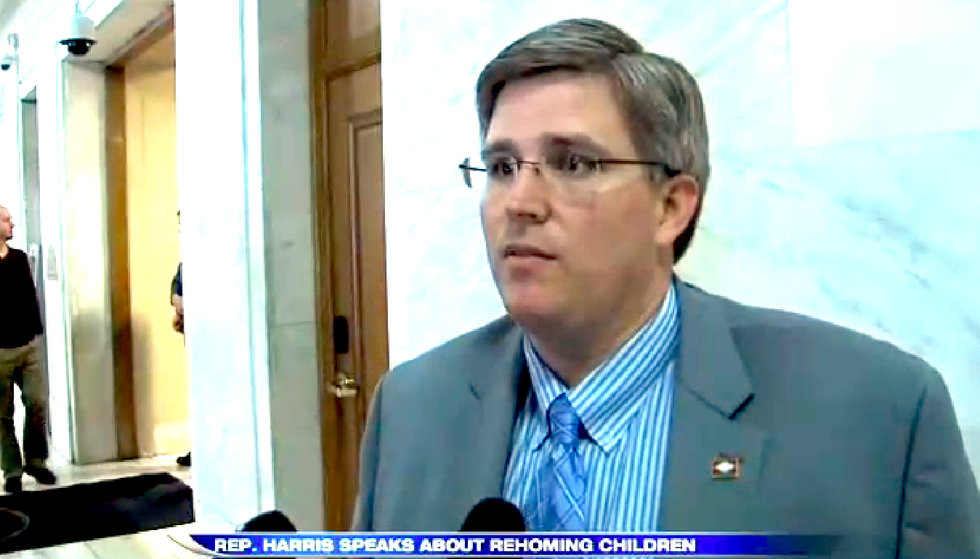 Arkansas state Rep. Justin Harris (R) is stepping down from leadership positions in two state House committees as the fallout continues from his "rehoming" his adopted daughters to a rapist, the Arkansas Times reported on Monday.

Harris asked and received permission from House Speaker Jeremy Gillam (R) to resign as vice chair of both the House Joint Performance Review Committee and the Committee on Aging, Children and Youth, Legislative & Military Affairs. Gillam told the Arkansas Democrat-Gazette that Harris did not give a reason for his departure in his resignation letter.

The latter committee is in charge of the state Department of Human Services (DHS), which became embroiled in a dispute with Harris after the Times broke the story of one of the girls being assaulted by Eric Cameron Francis, a former employee of a Christian pre-school operated by the representative and his wife. Francis adopted the girls from Harris' care in October 2013.

Harris has accused the agency of neglecting to help him after he became aware of issues concerning the girls' "rehoming." But multiple witnesses rebuked his version of events, with one saying Harris and his wife believed that the girls were possessed by demons.

According to the Democrat-Gazzette, emails dating back to 2013 show a tempestuous relationship between Harris and the department. In March of that year, for example, Harris convinced colleagues to block a bill that included funding for DHS because he could not secure a meeting with agency officials.

But other messages from earlier that month depict a pleasant working rapport between Harris and Cecile Blucker, who heads the department's Division of Children and Family Services. Harris' attorney characterized her client's relationship with Blucker as "on again, off again."

Francis pled guilty last November to three counts of second-degree sexual assault against one of Harris' former adopted daughters, as well as two other victims.