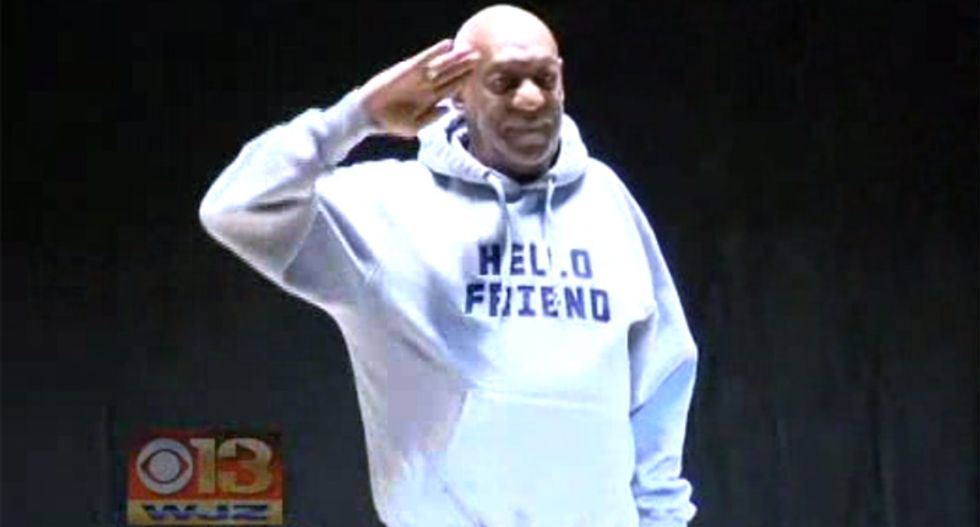 Bill Cosby at the Modell Center for the Performing Arts - (Photo: screencapture)

Appearing at Baltimore's Modell Center for the Performing Arts, comedian Bill Cosby followed the removal of a heckler accusing him of rape with an anecdote about sin, concluding, "Jesus would give you a little wiggle room."

The former television star has continued a stand-up comedy tour despite accusations of doping and sexually assaulting women, with two more women coming forward leveling accusations at the comedian on Friday, bringing the total to over three dozen.

According to the Baltimore Sun, Cosby fans were greeted outside the performing arts center on Friday night by protesters organized by the advocacy group SlutWalk Baltimore, holding signs and demonstrating against a man they described as a "serial rapist."

Cosby, who entered the half-full hall to a loud ovation, was 10 minutes into his routine when a man in the balcony stood up and yelled, "Thirty-eight women spoke up and called you a rapist. Thirty-eight women!"

Fans of the comedian began to yell back, saying "Shut up!" with one calling out, "I love you, Bill!"

Cosby quieted the crowd, telling them, "I am going to handle this the way I want it handled.  We're going to remain calm. We don't need to yell and argue. We're going to let the person talk until the usher finds him and politely and quietly gets him to leave."

Five minutes after ushers escorted the man out, the comedian launched into a unusual tale, explaining how he first came to understand sin after stealing a quarter from a church collection plate.

Explaining that he preferred dealing with Jesus Christ rather than his less-forgiving father, Cosby concluded, "Jesus would give you a little wiggle room."

Learning of the anecdote, protester Sonja Kinzer wondered how Cosby's fans could hear the story and not be offended by its implications.

"These people know these women were victimized, and they couldn't care less," Kinzer said. "They should be ashamed of themselves."

One counter-demonstrator, Zeanyanna Johnson, defended Cosby, saying he hasn't had the benefit of a trial.

"I have been sexually assaulted," Johnson explained. "I know what it feels like. But the man hasn't been charged with a crime, and the man hasn't gone to court. The Bible says, 'Judge not, lest you be judged'."