Bill Maher says fraternity culture is like Islamic State: 'A cult is a cult' 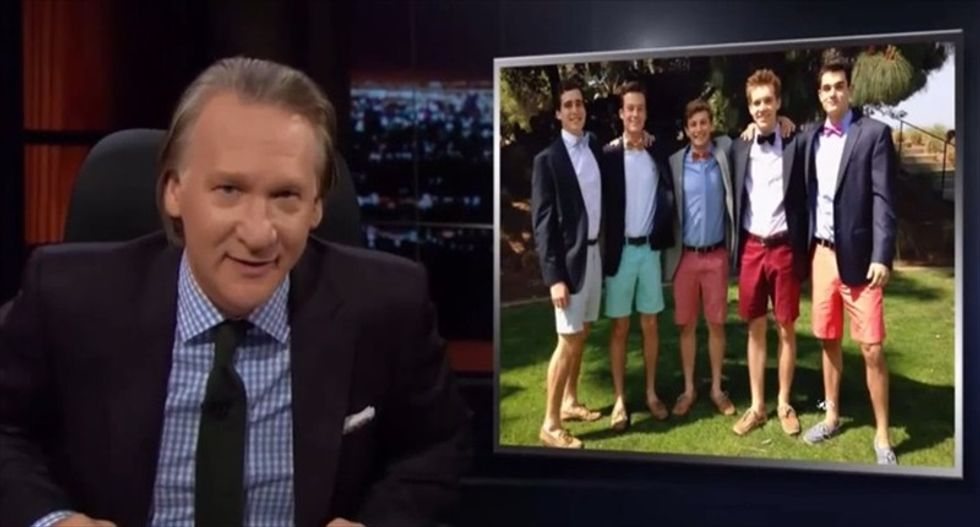 The worst thing about fraternity culture, Real Time host Bill Maher said to close Friday's episode, was how it substituted abusing its members for actual companionship, pointing out that pledges die every year from being pushed too far by their "brothers."

"Jesus, why not just pledge ISIS?" Maher said. "Hey, a cult is a cult, and that's what a frat is -- a place where they strip you of your personality and rebuild it in their image. That's why when a girl says, 'I'm dating a frat guy,' no one ever says, 'What's he like?'"

Maher said he always found it odd that, while universities as a whole tend to be politically correct to a fault, fraternities were allowed to operate as "little Vatican cities of depravity" that no longer fit in with society. As proof, he asked the audience to remember the film National Lampoon's Animal House.

"In 1978, watching a guy decide whether he should have sex with an out-cold high school girl was something we all considered hilarious," he argued. "And Bill Cosby still does."

And if you were the kind of person who would willingly degrade women or drink to the point of illness in the name of "tradition," he said, maybe they were better off not going to college to begin with. The only thing for predominantly-white frats to do was to truly integrate, and add women and members of color.

"You're not really fraternities anymore -- you're more like that hippie co-op on campus where a house full of Art History majors get stoned and mix a big lentl casserole," Maher said. "That's right, fellas, gather up your beer funnels and your ass paddles and your lacrosse sticks and your big red plastic drinking cups and get the f*ck out."