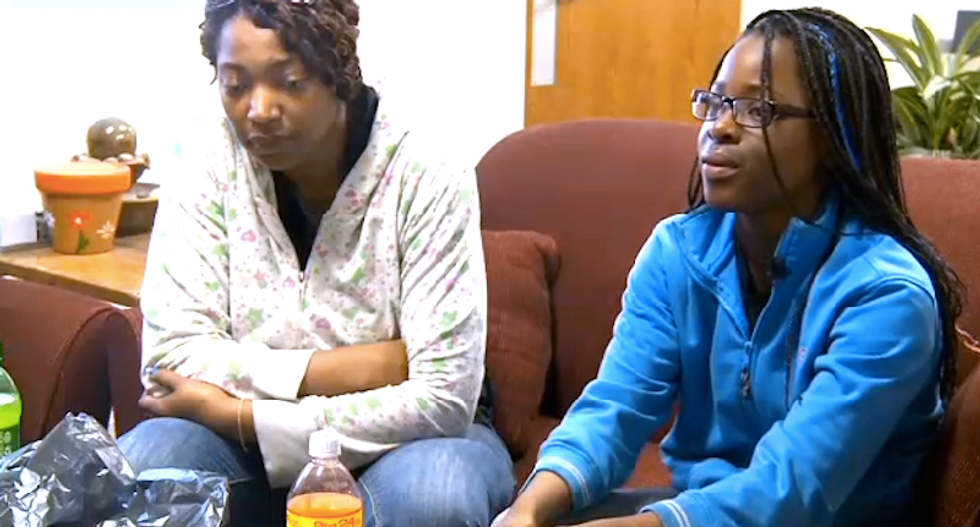 An Indiana sixth-grader’s parents were banned from school after confronting administrators over racist threats made against their daughter.

NyZeria Neely, the only black student in her high-ability class at Concord Intermediate School, said she found a pair of threatening notes in her locker two weeks in a row.

The first note, which she found last week, warned, “Watch your back,” reported the Elkhart Truth.

NyZeria said she considered crumpling up the second note, fearing no one would understand how she felt targeted in a school where just 10 percent of students are black and 2 percent of school personnel.

But instead she took a photo of the note and showed it to her teacher and then her principal, Chad Stamm.

“He told me not to worry because it’s just words,” NyZeria said. “But it’s more than words. I felt that it was offensive -- very offensive.”

Superintendent Wayne Stubbs said he agreed, saying the note was unacceptable and would be taken seriously as a possible safety threat.

The school district sent out an automated message Tuesday to alert parents of the situation and warning that harassment would not be tolerated.

But the girl’s parents complained that administrators did nothing when another girl called NyZeria a “n****r” three weeks ago, before she found the notes.

“They have taken it lightly,” said her mother, Gina Neely. “It’s too severe of a case to ignore something like this. They don’t want to hear me.”

Her parents, carrying a handmade poster reading, “STOP BULLYING OUR CHILDREN,” went to the school to demand an explanation Monday.

However, the meeting with administrators ended with a no-trespass order issued against the parents by the Elkhart County Sheriff’s Department.

Gina Neely admits she got loud during the confrontation, but she complained that administrators had handed off the case to the school resource officer instead of addressing it themselves.

The girl’s parents want a public apology from school officials and may file an independent report with the sheriff’s office.

In the meantime, Neely has pulled NyZeria and her three siblings from the school, saying she did not feel comfortable sending them to class while she was barred from campus.

The family may transfer the children to Elkhart schools, where about 15 percent of the students are black.